When the mighty Secretariat retired to stud, few doubted he would succeed. The greatest son of arguably the best sire ever to stand at stud in North America, Bold Ruler, he was a half-brother to a leading sire in Sir Gaylord. The greatest racehorse to set foot on a North American race track, Secretariat had the looks to match his race track record. Combined with possibly the finest book of mares a first season sire ever covered, Secretariat had it all. 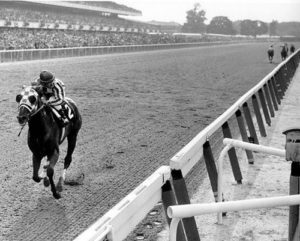 After a brief fertility scare, Secretariat produced a first crop of 28 foals. He got off to a good start when his first crop included the G1 winner Dactylographer (William Hill Futurity). Secretariat’s 16 crops included 22 graded winners, including champions Risen Star (Belmont Stakes) and Lady’s Secret (Horse of the Year).

However, none of his performers came close to achieving what he did, and “Big Red”, as Secretariat was known, while Secretariat sired nine G1 winners, he did cover some of the world’s greatest mares. He also failed to leave a leading sire son behind, and, as a result of the quality of his mares, Secretariat was judged harshly for never leading the US sires list.

Having said that, Secretariat has left an influence on the thoroughbred which goes far beyond of that achieved by many superior stallions. Champion broodmare sire in the USA in 1992, Secretariat’s daughters produced winners of the Epsom Derby, Belmont Stakes, Preakness Stakes, Breeders Cup Juvenile, Oaklawn Handicap, Travers Stakes and Haydock Park Sprint Cup, to name but a few.

Overall, Secretariat’s daughters produced 24 G1 winners, which is an impressive tally (especially when taking into account that he covered small books of mares by today’s standards).

Secretariat has also been the broodmare sire of some of history’s greatest ever sires. Sires such as Storm Cat, A P Indy, Gone West, Dehere, Volksraad, Chief’s Crown and Summer Squall were all produced by daughters of the 1973 Triple Crown winner.

Today, there are a number of high-class racehorses inbred to Secretariat. One such example is leading SA sire Tiger Ridge, while another is the recent G1 Arkansas Derby winner Bodemeister is another. Another contender for the 2012 Kentucky Derby is last year’s champion US 2yo Hansen – also inbred to Secrerariat.
G1 winners inbred to the great chestnut champion include Sky Mesa (Hopeful S), Dialed In (Florida Derby), Eden’s Moon (Las Virgenes S), Ice Box (Florida Derby), Tell a Kelly (Debutante S) , while former Breeders Cup winner Eldaafer is another inbred to Secretariat.

The fashionable US sire Majestic Warrior is another inbred to the chestnut.

This phenomenon should continue to grow as long as sons and daughters of such sires as Gone West, A P Indy and Storm Cat remain active.

With such a rich legacy left behind him, it is hard to agree with people who dismiss Secretariat’s stud record.

The memory of the late champion sire Jet Master will be well felt at the 2012 Emperors Palace Yearling Sale. He has 15 choicely bred yearlings on sale at this year’s National Sale, and it will be interesting to see how they are received in the ring. Among the last get of their great sire, these yearlings’ racing careers will be closely monitored by Jet Master’s many admirers.

For the past two years, Jet Master has been responsible for siring the National sales topper, and with so few of his offspring left to sell, no doubt a high premium will be placed on Jet Master’s sons and daughters.

Jet Master is also starting to make his presence felt as a broodmare sire. He is the maternal grandsire of the promising Cape 2yo, Abercrombie – who is the spitting image of Jet Master.

The great stallion also has three sire sons at stud in this country – Ravishing, Royal Air Force and Sudden Storm. Ravishing recently got off the mark as a sire when Little Chikitia won, while the first foals of Royal Air Force, now yearlings, sold well at the Cape Premier Sale (Book Two).

While Jet Master’s death was a sad and premature one, he could continue to make a great contribution to the South African stud book in future years.

With the tragic loss of Jet Master last year and retirement of such sires as Jallad and National Assembly, it’s a good time to look at some of the more promising young stallions, with their first crops racing, in South Africa.

Clearly, the proven US sire Trippi has been the first season sire sensation par excellence. I cannot recall any first season sire having got off to such a blistering start as Trippi has done. With plenty of racing left in the season, Trippi’s first crop has already produced three exceptional looking stakes winners in Agra, Hammie’s Hooker and Franny respectively. Well supported by high-quality mares, Trippi is living up to, and then some, all the expectations held off for him when he arrived in this country. He looks set to take over from Jet Master as South Africa’s most commercially sought after stallion.

A number of young sires have recently got off the mark with their first winners. All of Ashaawes, Atso and Carpocrates have been represented by their first winners recently. Ashaawes’ son, Donnie Brasco, is a runner in Saturday’s G1 SA Nursery, while there is plenty of praise surrounding the progeny of Atso and Carpocrates. All three of the sires mentioned have exceptional pedigrees, and could yet be anything.

The late Natal sire, Stronghold, has also got off to a strong start with his first crop. The Danehill horse has had four winners, to date, from just seven runners.

No doubt this list will become clearer as the season progresses, and more stallions get off the mark.

When Golden Dawn won Saturday’s Listed Sweet Chestnut Stakes, she became the latest stakes winner bred on the Goldmark/Elliodor cross. To date, that combination has bred four stakes winners including July winner Trademark (a close relation of Golden Dawn) and G3 winners Key Decision and Maker’s Mark.  It has also produced the high-class performers Laredo Gold and Golden Riviera.
Thus of Goldmark’s 11 stakes winners, four are out of Elliodor mares.

Saturday’s Sweet Chestnut Stakes honours the wonderful filly of the same name. Trained by Mike Bass, Sweet Chestnut won no fewer than six feature races including the Cape Fillies Guineas and, what is now, the Cape Flying Championship. She was a superb race filly, with tremendous class and speed, who also ran champion Over The Air to a length in the Diadem Stakes of 1979.
At stud, Sweet Chestnut produced seven minor winners, but nothing of her class.

Euthanized on October 4, 1989, due to laminitis.
Buried at Claiborne Farm, where he stood his entire stud career.

3 comments on “Secretariat – great sire or a dud at stud?”

In the Footprints of Giants