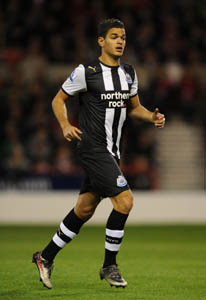 All eyes are firmly focused on the top of the Barclays Premiership table as the Manchester clubs fight for supremacy of England, but the DW Stadium will be abuzz this Saturday as the Latics continue their fight for premiership survival and host Champions League seeking Newcastle United. The hosts, just like last season, are finishing well and have come into fine form in recent weeks. Their chairman should be commended for their resurgence as there was no mention of a possible sacking of Roberto Martinez during some really trying times. Newcastle were plying their trade in the second tier of English football two seasons ago, but now find themselves knocking on the door of the big boys in Europe.

The Latics are having their best run of the season and the form has come from nowhere. They kicked things off when defeating Liverpool at Anfield (a feat that wasn’t matched by City & United) in March, followed by a comfortable victory against Stoke. They were dealt two controversial blows in going down 2-1 to Chelsea in their next fixture but quickly got back into form with brilliant victories over Manchester United at the DW Stadium and Arsenal at The Emirates. They looked a tired side at Fulham last weekend but still took the lead, courtesy of Emerson Boyce before conceding twice, the last of which came late in the game before going down 2-1 to the hosts. Martinez was quick to add the following in his post-match interview, “I was worried about Fulham because it was one game too many, physically and mentally, but we will be fresh for Newcastle.” Amazingly, Wigan have won just three matches at home all season, with two of those wins coming in the last four weeks. The players have shown great passion and desire over the past few weeks and are fully committed to avoiding the dreaded drop to the Championship.

The Magpies have been the surprise package this season and find themselves in fourth spot, three points ahead of Tottenham Hotspur and three behind Arsenal, whom they have a game in hand on. With all the attention on Newcastle, their players seemed the least fazed of all, brushing aside Stoke last weekend thanks to two goals from Yohan Cabaye and another from Papiss Cisse, his 11th in just 10 games since he joined the club from Freiburg.  Newcastle were tipped as relegation candidates last August, having seen a clutch of their top stars leave.

But three of Alan Pardew’s inspired moves have helped the club tremendously, bringing in Yohan Cabaye, Demba Ba and Papiss Cisse. The French midfielder Cabaye has been superb all season since arriving from Lille for a bargain fee of £5 million, scoring four goals this season and providing eight assists but more importantly being the centre of Newcastle’s attack’s and set-pieces. The Senegalese partnership of Ba and Cisse has also paid off in spectacular style with Ba having scored 16 goals and Cisse with 11, breaking a record for scoring in six consecutive games – which Robin van Persie has not even done. Another player who has come into form after fully recovering from a broken leg injury is Hatem Ben Arfa who completes a deadly attacking trio for The Magpies.

It was the Geordies who claimed the reverse fixture 1-0 in late October but face a pumped up Wigan side this time around and will be severely tested here. The best bet is possibly to go big on total goals and with the draw the most likely outcome.