Run For Roberts? The lightly-weighted outsider Badge Of Choice represents the Roberts yard and would be a pleasing surprise winner

Scottsville plays host on Sunday to the R125 000 Listed Michael Roberts Handicap run over 1800m. The race is run annually and named in honour of one of South African horseracing’s greatest jockeys and most celebrated sons.

Michael ‘Muis’ Roberts is an eleven time former champion jockey of South Africa and was champion jockey of Britain in 1992. Roberts retired from the saddle just over a decade ago following a neck injury from a fall in 2001, and trains racehorses with great success out of Summerveld in KZN.

The very competitive and driven Roberts has won this race many times and it is pleasing to see that he takes his chances with the lightly weighted Badger’s Drift 7yo Badge Of Choice. The gelding is a longshot in anybody’s book, but with talented apprentice Donovan Dillon in the irons, must have a chance at best. 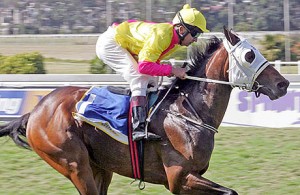 Classy. Anton Marcus and Sean Tarry team up with the classy Baracah in the Listed Michael Roberts Handicap

Anton Marcus and Sean Tarry team up with the very smart King Of Kings 4yo Baracah, who has his a return run in KZN after a puzzling form loss last year. With an unplaced effort behind  Zambucca in the Victory Moon Stakes, the gelding has won 3 of his last 4 starts and looks to be maturing nicely.

As he so often does, Mike De Kock may give Tarry most to think about.  His 2012 KZN 1600 winner Silent Partner  has shown a form return at his last few starts, and cracked pn nicely over the Vaal 1400m when beaten narrowly by the capable Approachable last week.

A King Is Born

Alyson Wright’s A King Is Born is a consistent son of Second Empire, who is battling to post his fifth career win.

A King Is Born last won over a year ago, but has paid his keep with regular places. He was well beaten last time by his stablemate Penhaligon , when probably caught flat-footed in an MR 91 Handicap over 1900m at Clairwood.

He has always shown a tendency to pick it up late in his races, and Kevin Shea will no doubt have worked out a way to get him into the action sooner, after having partnered him at his last three starts.

Despite tremendous success in Cape Town during the Sizzling Summer Season, the power partnership of Dennis Drier and jockey Sean Cormack have not taken the eye off the ball of the more bread and butter fare in their home province and they team up with the smart former De Kock runner, Top Mark.

The Brazillian-bred 6yo is a son of Mark Of Esteem who is versatile and able to be parked most places during his races. A winner of 3 of his 19 starts, he is a fit, well drawn and talented fellow who enjoys this track.

Mike Bass’ Western Winter 5yo Komatipoort has disproven the theory that he is a staying sort, and has shown a sparkle recently over shorter. He is a kilo worse off with A King Is Born on their Umbrella Thorn clash, but could run a drum on his present well-being.

The rest cannot be fancied and we are going with the classy back-to-best Baracah to beat Top Mark and A King Is Born.

That said, we’d enjoy nothing better than to see Badge Of Choice cause an upset and win the race for Muis!