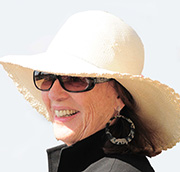 The Triple Tiara is the ultimate test for a filly and carries a R1-million bonus for winning all three legs. Igugu (2011) is the only filly to have won the Triple Tiara since its inception in 1999.

Mary Slack said: “Wilgerbosdrift is delighted to be associated with the Triple Tiara, three top-class races that cater for the country’s best fillies. It is essential for the breeding industry that fillies race for excellence in South Africa and are rewarded accordingly.

“Superior fillies produce champion racehorses and they are the flag bearers of our industry in generations to come. Igugu is the only filly in South Africa to have won all three legs and let’s hope that there is another champion in the wings,” she added.

Phumelela Sales Executive Clyde Basel said: “We are privileged to have Wilgerbosdrift as the sponsor of the Triple Tiara. They have bred multiple
graded winners and are having a super season. To have a top breeder’s brand associated with the Triple Tiara series is fantastic for the event. Many thanks to Mary Slack for making this sponsorship possible.”