Everyone has a different idea as to who the world’s very best stallions are. Here are my choices. One of the greatest stallions ever to stand in Europe, Galileo has stamped himself as a worthy heir to his sire, Sadler’s Wells. This season alone, Galileo has been represented by 17 individual stakes winners and four individual Grade One winners. His 2013 Gr1 winners include his second Epsom Derby winner in the form of Ruler of the World – as well as his second Irish 2000 Guineas winner in the form of Magician.

From his first crops, Galileo has sired 138 stakes winners (from 1665 foals), 35 Gr/Gp 1 winners and 21 official champions. Already a successful broodmare sire, Galileo is an extremely promising sire of sires – with his son New Approach (sire of two British classic winners in his first crop) arguably the world’s most exciting young sire. With such sons as Frankel, Rip Van Winkle and Soldier of Fortune yet to have runners, the best is yet to come for Galileo as a sire of sires. Last year’s champion sire in Japan is showing a similar level of dominance as was such enjoyed by his legenday sire Sunday Silence. Already a proven international G1 sire (his Beauty Parlour having won the French 1000 Guineas), Deep Impact is again well clear on the Japanese sires premiership. For the past three years, Deep Impact fillies have won the Japanese 1000 Guineas (Oka Sho), and his sons, Deep Brilliante and Kizuna, are winners of the 2012 and 2013 Japanese Derbies respectively. The former Japanese Triple Crown winner has been represented by 11 stakes winners this year alone, and, of his 34 stakes winners to date, Deep Impact is represented by nine Gr1 winners. Not only an exceptionally talented stallion, former Dubai World Cup winner Street Cry is an extremely versatile one as well. He gets outstanding progeny on dirt (Street Sense, Zenyatta) and turf (Shocking, Zaidan, Whobegotyou) alike, Street Cry gets top sprinters (Street Boss) and stayers (Shocking) and both his colts and fillies run. In Zenyatta, Street Cry produced one of the greatest racemares ever seen on the North American turf, and his son, Street Sense, is the only horse ever to win both the Breeders Cup Juvenile and Kentucky Derby.

Street Cry has some exceptionally talented looking 2yos in training this year in the form of Majeyda (Star Stakes) and impressive debut winners Sound Reflection and Folk Melody, and Street Cry looks well positioned to build on his already formidable record at stud. While he could only finish second on the Australian general sires list for the past season, Coolmore’s Fastnet Rock still enjoyed a superb season. The son of Danehill was represented by 15 individual stakes winners, including the G1 winner Super Cool. To date, Fastnet Rock (whose sons are proving wildly popular at stud in Australia) is the sire of 45 stakes winners, of which 13 (30%) are G1 winners.

Remarkably, Fastnet Rock is siring 4% Graded/Group winners to foals – during an era when an above average stallion sires 4% stakes winners. He stands for the impressive stud fee of AUS $275 000 or over R2.4 million! A horse who has enjoyed a meteoric rise to stardom, the Danzig horse War Front began his stud career at a fee of $12,500– but now stands for $80 000. His ongoing success is also reflected in the fact that War Front was chosen to be the mighty Zenyatta’s mate for 2013.

From his first crop of 75 foals, War Front has been represented by no fewer 11 stakes winners (15%). His current crop of 3yos include no fewer than 3 Derby winners – Departing, Lines of Battle, and War Dancer, while War Front’s 2yos include the sensational juvenile War Command.

With War Front covering a better quality of mare than he did when first retiring to stud, the sky is the limit for one of the great Danzig’s last top sons. Another sire who has seen his stud fee rise dramatically, Dansili began his career at a fee of GBP 8,000 but stood for GBP 80,000 in 2013. Champion sire in France in 2006, Dansili has compiled a record to make himself possibly Danehill’s finest sire son domiciled permanently in Europe. In 2013 alone, Dansili has been represented by no fewer than 13 stakes winners, with three individual Gr1 winners – Flintshire, Laughing and Winsili. Winsili and The Fugue have given their sire back to back wins in the G1 Nassau Stakes, while the outstanding miler has been represented by no fewer than three winners of the Grand Prix de Paris to date. A truly outstanding stallion Dansili (siring 8% SW to foals) is closing on the magic 100 SW’s mark, and has 82 black type winners to his credit. 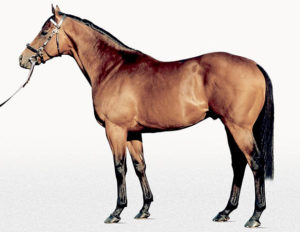 The horse mostly likely to maintain the Seeking The Gold sire line, Dubawi has consistently proven one of Europe’s very best stallions. The sire of Europe’s top older horse for 2013 (Al Kazeem), Dubawi is the sire of 10 Gr/Gp 1 winners to date. His offspring have won at the highest level at a range of distances – from 1200 (Lucky Nine, Willow Magic) to 2400m (Hunter’s Light, Waldpark). While Dubawi is yet to win a general sires title, his achievement of producing 56 SW’s from 608 foals (9%) give him statistics comparable with the very best around. He has also proven himself as a sire capable of siring the “Big Horse” in both hemispheres, with 2000 Guineas hero Makfi and Dubai World Cup winner Monterosso amongst his best. A stallion who made a spectacular start to his stud career, Oasis Dream is firmly established as one of Europe’s top sires. A more versatile stallion than racehorse, the former champion sprinter is siring Grade/Group One winners from 1000m-2400m. A sire whose progeny have done well in both the US and Europe, Oasis Dream is now a sought after sire of sires. His son, Captain Gerrard, is currently one of Europe’s leading first crop sires. Oasis Dream himself is having a terrific 2013, having been represented by nine stakes winners. A true rags to riches story, the now 20 year old Pivotal began his stud career standing for a fee of GBP 6,000. However, as tribute to his remarkable success, Pivotal’s fee at one stage was GBP 85,000, but is now GBP 45,000. The sire of over 100 stakes winners , Pivotal has sired 22 G1 winners – including eight classic winners.

Pivotal’s progeny have excelled over a range of distances, and he has done very well in one of Britain’s top one mile races, the Lockinge Stakes. This race has been won three times, including in 2013, by sons or daughters of the stallion. He has had another great year in 2013, being represented by black type winners including German Oaks winner Penelopa.

A successful sire of sires, principally through his son Shamardal, Giant’s Causeway is a superb broodmare sire. With his oldest daughters only 11, Giant’s Causeway is already the maternal grandsire of nine Grade One winners. These include sensational US 3yo Verrazano and South African superstar Soft Falling Rain.