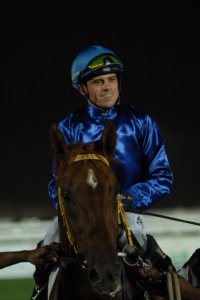 Full Cream! Chris Taylor returns to the saddle after a break of six weeks

Crack former KZN based jockey Chris Taylor makes a comeback to race riding on Sunday after a six week break from the saddle. Taylor took time out to set up the new family business, and says that the break has done wonders for his enthusiasm.

Together with colleagues Francois Herholdt, Sherman Brown, Karl Zechner, Randall Simons and Hennie Greyling, Taylor, or Chippy as he is popularly known, makes the long trip to Zimbabwe for Borrowdale racing this weekend.

His return marks the end of a six week sabattical from the saddle,  while managing the family Wakaberry Froyo store in the Mimosa Mall in Bloemfontein.

The 34 year old Taylor came out of his time at the SA Jockey Academy in 1999, and spent many years of the first decade of the new millennium riding overseas.

Having ridden top horses from Escolita Fitz to Young Rake and the likes of Jay Peg and Ipi Tombe, in countries from the UAE to Korea and even Japan, Taylor has plenty of experience and is a popular and talented rider, with a top class work ethic.

Taylor, who became the father of twin sons a year ago this month, is focussed on riding winners again.

In an interview with the Sporting Post today, Taylor confirmed that he was raring to get back to race riding.

He flew to Zimbabwe on Thursday evening and proudly confirmed that he was walking around at 53kgs and gyming ‘ twice as much as before’. That’s not bad going after six weeks of smiling at demanding customers and serving frozen yoghurt!

He said that his personal equisizer had been working overtime, and felt that he was fitter now than he had ever been.

“The move to Bloemfontein and the opening of the Wakaberry outlet has been an exciting challenge. And while I have worked on staying fit, I have the feeling that yoghurt must agree with me! Or it could be the 11 hour work days,” he laughed.

Shifts at the popular and fastgrowing franchise make the life of a jockey seem like child’s play:

“Typically my ‘shifts’ are from 7am to 11am and then back again from 3pm to 10pm. That is six days a week. It sort of gives one new respect for the concept of working for a living,” he laughed.

Taylor said that he had six mounts at Borrowdale Park on Sunday, of which three were at 52kgs.

He rides four for Kirk Swanson, as well as Top Trumps for Gavin Macleod in the first race, and the debutante Sonata for Alyson Wright in the fourth race.

At his last visit to Zimbabwe on their final day of last season, Chris won on the game Sobieksi mare, Chando, and rides her again on Sunday.

He was due to ride work for Penny and Alistair Fisher and Kirk Swanson on Friday and Saturday mornings.

The Borrowdale meeting hosts seven races, with the first event scheduled for 13h20.

High On A Heiress