With the European flat racing scene done and dusted for 2013, it is an appropriate time to look back at some of most memorable contests of the year, peruses Sarah Whitelaw.

The unbeaten daughter of Motivator mowed down a superb field to win Europe’s greatest race (Prix de l’Arc de Triomphe) by an emphatic five lengths. In beating some of the world’s top older performers, Treve stamped herself a true champion, and the 3yo was later named a deserved Cartier Horse Of The Year. Unlike the 2013 Kentucky Derby winner Orb, Treve stays in training for 2014.

After losing his unbeaten record with a last place finish in the Derby, 2000 Guineas winner Dawn Approach bounced back to winning ways with a game, short head win over Toronado in the St James Palace Stakes. While the pair would go on to muster just one win between them, Dawn Approach showed plenty of heart in rebounding from a disastrous run. The son of sensational sire New Approach stands his first season at stud in 2014.

In scoring a first ever Gold Cup win for a ruling British monarch, Estimate bought the house down at the 2013 Royal Ascot meeting. The 4yo filly, who would make just one other appearance in 2013, was also a high-point for her truly great sire, Monsun. The latter, now deceased, was one of the world’s great sires, and had arguably his best ever season in 2013 – with his stakes winners including no fewer than five.

A truly exceptional sprinter-miler, Moonlight Cloud’s last to first romp in the Group One Prix de La Foret had to be seen to be believed. The daughter of Invincible Spirit wracked up three Grade One victories during the season, and could pick up another in Hong Kong.

Out of a mare by the KZN based Spectrum, Moonlight Cloud’s impressive stakes winning tally includes no fewer than six Group One wins, and she was named the 2013 Cartier Older Horse (over a strong group of males). Interestingly enough, Moonlight Cloud and Treve are both descendants of the mare Margarethen.

For all South African racing fans, Soft Falling Rain’s romp in the Group 2 Nayef Joel is one which live long in the memory. The handsome son of National Assembly, who had been unbeaten in his first seven outings, was coming into the 1600m contest having suffered his first ever defeat.

However, Soft Falling Rain made amends in no mean style, romping home by 3.5 lengths over the classy 3yo Montiridge. While he did not seem to act in the going next time out, Soft Falling Rain is an exceptional athlete, and is a great tribute to the quality of horse bred in South Africa.

Al In A Week Should he finally win the title of South Africa’s Champion Sire, Captain Al will certainly be a worthy recipient. The stallion, champion sire of 2yos for the past five straight seasons, has been runner up twice previously.

Final Star For US Legend? The great stallion, A.P. Indy, was one of the finest stallions to stand in North America over the past 50 years. Twice champion sire (in 2003 and 2006), A.P. Indy sired no fewer than 29 Grade One winners. A great sire of sires, and broodmare sire, A.P. Indy’s final crop are now two.

From just 30 named foals, A.P. Indy’s current crop of 2yos include several extremely promising looking winners, including the highly rated Kentucky Derby prospect Honor Code. The latter was an unlucky second to Breeders Cup Juvenile runner up Havana in the Grade One Champagne Stakes, and could represent his great sire’s final chance to have a thus elusive Kentucky Derby winner.

Honor Code certainly lacks nothing for breeding – the colt, a half-brother to Breeders Cup runner up Noble Tune, is out of a stakes winning Storm Cat mare, whose second dam is champion Serena’s Song.

His unraced offspring include a fillies out of Grade One winners Dream Empress and Game Face, a colt out of G1 Moyglare Stud Stakes victress Preseli, and a filly out of a Sunday SIlence half-sister to champion Sky Beauty.

With his tally of stakes winners 144, and 11 champions to his credit, A.P. Indy’s numerous fans will, no doubt, be following the progress of this historic, final crop. 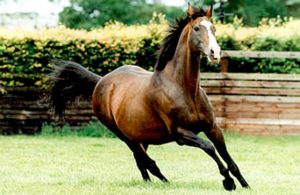 Sertorius, winner of Australia’s Gr2 Sandown Classic, is the latest high profile winner to contain inbreeding to the great mare Fairy Bridge, through her sons Sadler’s Wells and Fairy King. Sertorius is by Sadler’s Wells’ finest sire son Galileo and is out of a mare by Fairy King’s finest sire son, Encosta De Lago.

With Encosta De Lago, and, even more important, Galileo, leaving behind numerous sire sons, this pattern of inbreeding looks set to become an increasingly important factor for thoroughbred success.

The Best Of Company