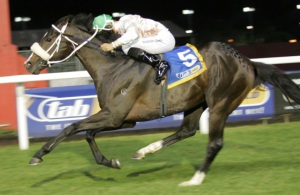 The New Zealand bred Diamond King showed his appreciation of the extra ground and the removal of blinkers, when he skated clear to win the R135 000 Listed KZN Guineas Trial at Greyville on Friday evening. In a slap in the face for local breeders, imported horses filled the first three places.

On a good track, the field of eleven 3yo’s looked competitively matched, with the Gauteng visitor Henry Of York eventually starting a weak 7 to 2 favourite, with the De Kock runner Taarish at 9 to 2.

The field jumped on terms at the mile marker with Sensei leading early from Delaware Bay and Dream In Combat.

In the early stages Diamond  King was loping along at the rear, just ahead of Golden High.

Diamond King turned for home nearer last and had to be switched inside twice by a cool as a cucumber Brandon Lerena, before making up good ground in the final 300m.

Diamond King  went past Henry Of York on his inside and then held on strongly to beat the fancied Taarish, who was attacking wider out under replacement rider Stuart Randolph.

Weiho Marwing’s Henry Of York looked dangerous down the rail and ran a further 1,75 lengths back in third.

Taarish had no chance with the winner, but maintained his consistent form profile to run second.

Trained by Tony Rivalland out of Summerveld for longstanding KZN owner Mary Liley, Diamond King has now won 2 races with 1 place  from 5 starts, for stake earnings of R141 625.

This was his first try past 1200m and the manner of his win suggests  that he relished the extra and could be even better up to 2000m.

The colt, not a cheapie at  Aus $250 000,  is by More Than Ready out of the six time winning O’Reilly mare, Salsa, a stakes winner in Australia and New Zealand and Gr1 placed over a mile.

The Vinery Stud stallion More Than Ready is a son of Southern Halo and is world class.

He was a Champion First Season Sire, A Champion 2yo Sire in both hemisphere’s and has produced more than 115 stakes winners worldwide.  More Than Ready has sired 10 individual Stakes winners already in 2013 including Stakes winning 2yo’s Romantic Moon, Vivi Veloce and Excitable Boy, 3yo Oaks winner’s More Than Scared and Moreish and older sprinters Ready To Rip and Better Than Ready. He stands alongside his sire son, Pluck

The Girl Can Run!