With the majority of the world’s top races in the Northern Hemisphere done and dusted for 2013, it is an appropriate time to look at the leading sires, and also at some of the more promising, up and coming sires whose progeny should be worth watching in 2014.

It is interesting to see the dominance of the Sadler’s Wells male line – responsible for the 2013 leading sires in France, the UK and the USA. Sons of Montjeu enjoyed a fruitful year – three sired G1 winners, while Galileo’s sons included the sensational pair of Teofilo and New Approach. It was also a good year for English Derby winners, who headed the sires list both in the UK and in France.

The mighty Galileo is well clear to register his fourth consecutive general GB/IRE sires title (and fifth overall). The world’s premier stallion had another exceptional season, and his progeny, in the UK alone this year, earned GBP 2 620 000, ahead of Dubawi, Oasis Dream, Teofilo, and Dansili. The son of Sadler’s Wells was also the leading sire of Group/Grade wins during the year, with his offspring winning eight top flight contests.

Galileo, who has been represented by 36 Grade/Group One winners overall, was represented by no fewer than seven top flight winners in 2013 (two in the Southern Hemisphere), including In-vestec Derby winner Ruler Of The World, Irish 2000 Guineas/Breeders Cup Turf hero Magician and Prix du Jockey Club winner Intello (a close relative of South Africa champion Fort Wood).

He is joined by two sons Teofilo (fourth) and New Approach (seventh) on the top ten list (by prize money), and the Galileo legacy looks set to grow further over the coming years.

Kitten’s Joy (El Prado) was one of the sire sensations of the year, and his fee has jumped from $50 000 to $100 000 for 2014 accordingly. The stallion could become the first US turf champion to head the US general sires list since Dr. Fager back in 1977 – although there is little separating him from runner up Speightstown at the time of writing. Despite not having a Breeders Cup winner in 2013, Kitten’s Joy is (according to Blood Horse statistics) still heads the US general list both by general earnings, and by North America only money earned.

Sire of the Prix De’l Arc De Triomphe usually heads the French general sires list – and it was no exceptional in 2013. Motivator, sire of unbeaten Arc heroine Treve, is currently well clear on the premiership ahead of Galileo, Monsun, Dansili and Muhtathir. Former Epsom Derby winner Motivator had a break out year, and was represented by seven stakes winners, including treble Group One winner Treve. Motivator looks set to emulate his sire, Montjeu, who was Champion Sire in France in 2005 – the year his son Hurricane Run won the Prix de’L Arc De Triomphe. 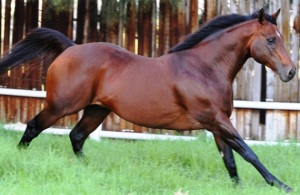 It was a second consecutive sires title for the Avontuur based Oratorio, whose great run of success continued in 2013. His 28 winners in Italy in 2013 earned over EU900 000, and was headed by the brilliant 3yo Biz The Nurse. The latter made history when becoming the first 3yo in nearly 30 years to win the G1 Gran Premio Di Milano, and also made off with the G2 Derby Italiano.

Oratorio, whose daughter Cherry Collect won both the Italian Oaks and 1000 Guineas heroine in 2012, was clear on the general sires list of Mujahid, Blu Air Force, Refuse To Bend and Aussie Rules.

There were a number of young sires who made a good impression this season.

A horse whose very first runner made headlines, Sea The Stars’ first runners, as could be expected of a Derby/Arc winner, took some time to find themselves. Nonetheless, Galileo’s half-brother made a solid start with his first juveniles in 2013 including the G3 winner My Titania, and smart debut winners Taghrooda, Seagull Star and Moontime.

While only eighth on the first crop sires list, Sea The Stars’ progeny look bound to improve with age, while a number of the horses above him on the list were bred to sire fast, precocious stock.

As the sire of a staggering three first crop Royal Ascot winners last season, New Approach got his career to a flyer. His progeny’s good form continued this season, including two classic winners (Dawn Approach and Talent), and an Investec Derby runner up, Libertarian. New Approach and his sire, Galileo, have certainly done much to raise the profile of English Derby winners at stud, and their legacy looks set to continue for decades. New Approach has a number of well related juveniles this season, and it is hard to see his stock not prospering next season.

As a son of a very ordinary stallion, Midnight Lute was always going to have his share of doubters when he retired to stud. Despite this, the dual Breeders Cup Sprint winner has made a fine start to his stud career, with his first crop of 3yos including no fewer than seven stakes winners, and two other Gr1 performers.

Midnight Lute, who is one of just three G1 winners for his sire Real Quiet, is already represented by a Queen’s Plate winner (Midnight Aria), G1 Acorn Stakes winning filly (Midnight Lucky) and a colt who was placed in the Preakness (Mylute). He is currently North America’s second leading second crop this season, in what looks to be a solid crop of sires.