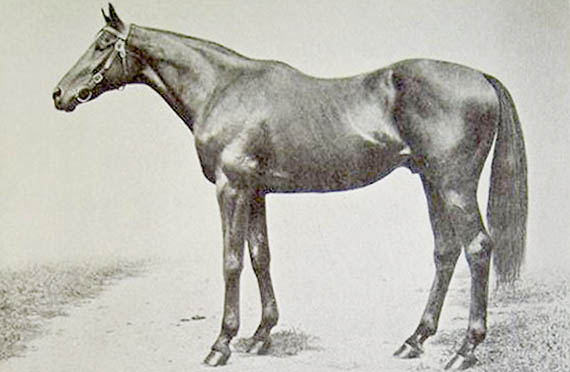 When making a list of outstanding stallions, it is easy to focus on a few big horses, rather than an individual stallion’s overall stud record. One way of determining a stallion’s success, however, is to look at the horse’ statistical record by means of percentage stakes winners to foals.

This is not a foolproof method; inevitably outstan-ding sires who cover big books of mares don’t have great statistics, while some sires, whose overall record may not be quite as good, have better statistics due to their lower numbers. In addition, the competition is likely to have been more limited in years gone by. Be that as it may however, here is a brief list of some of the best stallions (by stakes winners to foals) of the past 120 years or so.

The list excludes Southern Hemisphere stallions and focuses mainly on Europe and American based stallions, while a few other outstanding sires, such as Blandford (who without a doubt belongs on this list), did not have any accurate statistics available.

While the list is not a complete one, a few things are made very obvious. Modern day stallions, due to their much larger books of mares, battle to feature on this list, with many of today’s elite sires failing to feature at all.

Such iconic 21st century sires as Galileo (9%), Montjeu (8%), War Front (11%), Street Cry (6%), Dubawi (10%), Deep Impact (7%) and Unbridled’s Song (7%), fail to come close (in percentage terms) to the likes of Broomstick, St Simon, Bold Ruler and Northern Dancer. One of the surprises of this list is Sea-Bird, whom history has largely trashed as a disappointing stallion. The short lived champion left behind 33 stakes winners from just 171 foals, which included the great filly Allez France and leading French sire Arctic Tern.

Today, however, the Sea-Bird influence has all but disappeared as a male line, although he can be found in the names of Harbinger, Dawn Approach, Southern Halo, and Variety Club, to name a few. However, while Sea-Bird’s statistics are outstanding, he can’t be rated a better sire than Blushing Groom, Nureyev and Nearco. His legacy can’t compare to a number of the stallions ranked beneath him, which suggests these stats need to be taken with a pinch of salt.

Broomstick, who died at the age of 30 in 1931, was clearly an outstanding stallion of his generation. The son of Ben Brush was Champion Sire in the USA from 1913-1915, and his offspring include the first filly, Regret, ever to win the Kentucky Derby. Other notables sired by Broomstick (who won the Travers Stakes) include the brilliant handicap horse Whisk Broom II (subsequently the sire of Upset – the only horse ever to beat Man O’War), Preakness Stakes hero Bostonian, Sweeper II (2000 Guineas) and Cudgel (Champion Older Horse).

Champion Sire on three occasions, Broomstick was clearly an exceptional stallion. However, even he failed to obtain the dominance of St Simon (also sire of 25% stakes winners to foals). An unbeaten legend on the track, St Simon was Champion Sire in Britain on no fewer than nines, and topped the broodmare sires list six times. His progeny included 10 classic winners, including British Triple Crown winner Diamond Jubilee, and he is also the broodmare sire of the great mare Plucky Liege (dam of four Champion Sires).

The truly staggering name in this list, however, is Northern Dancer. Not only did the 1964 Kentucky Derby winner sire 147 stakes winners (23 %), but his sons, Nijinsky II, Nureyev, Danzig, Lyphard, Vice Regent, and Sadler’s Wells also feature prominently as well. Between them, those six sons of Northern Dancer sired a staggering 992 stakes winners!

Their leading sire sons include Deputy Minister, Caerleon, Alzao, Galileo, Montjeu, Theatrical, and Danehill – the latter being history’s all time leading sire of stakes winners, with an impressive tally of 347. By comparison, it is quite interesting to note that the other modern sire of sires legend, Mr Prospector, has two sire sons in the list, one of which is the ill-fated Arlington Million winner Chester House.

The latter, who died after leaving behind just 216 foals, was represented by an impressive 28 stakes winners, (13%), including G1 winners Ventura and Divine Park, but scarcely had the same impact as did fellow Mr Prospector sons Machiavellian, Gone West, Fappiano, or Seeking The Gold.

The Year Of The Song