Trainer Joey Ramsden made it a magnificent hat trick of Gr1 Gold Challenge wins as the beautiful grey King Of Pain brought the curtain down on the very last running of this champion producing mile contest at its traditional home of Clairwood on Saturday. And what a great ride by Bernard Fayd’herbe as Ramsden now finds himself with a likely July runner after a quiet Champions Season so far.

King Of Pain’s win may well play ducks and drakes with the overall July weights picture and we are in for an interesting few weeks.

Racing without Clairwood Racecourse would have been an unimaginable reality twenty years ago and yet the day passed with most of the happy crowd seemingly oblivious of the pending closure of the sport of king’s very own Loftus Versfeld.

Ramsden had won the last two runnings of the Gold Challenge with subsequent worldbeater Variety Club and also won it with former SA Horse Of The Year, Winter Solstice. There couldn’t have been many who believed that the enigmatic grey King Of Pain had a win over the likes of Beach Beauty and Yorker in him.

His starting price of 40 to 1 certainly underlined that.

The Cape based Ramsden was hobnobbing with the movers and shakers at Epsom (where colleague Aidan O’Brien also notched up a notable treble in the Derby) when crack heavyweight Bernard Faydherbe bounced King Of Pain out from his wide draw to go up front to dictate matters. 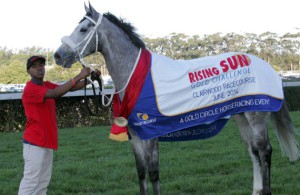 Proud moment as the champ wears the blanket

In typical thinking jockey style, Fayd’herbe had worked the race out in his head before the jump, a fact that may not always be as natural as it may sound when it comes to race riding:

“I knew I had to commit early and get him across as I felt that they would try and slow it up out front and turn it into a sprint for home. It was my one serious chance to get him up there.  He is a fabulous horse and I felt we had it won at the top of the straight as they hadn’t yet challenged me. And I knew he would kick again when they tried,” said Fayd’herbe.

King Of Pain brought them for home and Fayd’herbe kept him at it as first Yorker and then Beach Beauty took a potshot at him.

Inside the final 200m a win appeared on the cards and Fayd’herbe deserves great credit for keeping his mount going to win by three quarters of a length in a time of 95,45 secs. 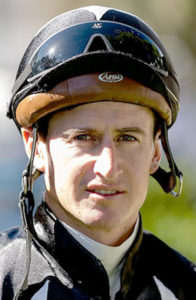 Bernard Fayd’herbe rode a serious race on the grey

Beach Beauty ran her usual game race to finish a game second ahead of Yorker, who showed again that a slow run mile is not his game and this will serve to fine tune him for the big one.

Champion miler Capetown Noir stayed on for fourth but never threatened as a likely winner.

Jet Explorer clipped heels and came down in the running. The horse apparently broke his jaw and jockey Richard Fourie has a suspected shoulder injury.

King Of Pain showed the fitness benefit of plenty of work on the Ramsden treadmill. One of a fleet, it seems!

King Of Pain was the second son of stallion Greys Inn to win on the day after Forries Waltz won the Listed Gatecrasher Stakes earlier on. He is his sire’s second Gr1 winner after Royal Bencher in the 2011 SA Derby.

An R80 000 Vintage  Sale  graduate, he was bred by Arc En Ciel and  is out of the Defensive Play mare  Viva La Belle, who was placed in Australia and is a half sister to Lady Of The Turf.

This was only his second win (he picked up the Magnum Mile in February at home) since downing Capetown Noir in the 2012 Selangor Cup thriller.

Now for the July. What a story that would make and as Joey commented from Epsom:” Seems farcical, doesn’t it? We go from somewhere like number 35 on the log and possibly into the final field! Lets wait and see.”