The Cape stars came out tops in the interprovincial needle stakes following last weekend’s Greyville thriller and the power game now moves to Clairwood this Saturday for the next round. The R1 million Gr1 Gold Challenge is a high quality mile contest and trainer Geoff Woodruff will be keen to exact revenge after a rough ride.

Woodruff is the perfect sportsman and gentleman and he was gracious in defeat when congratulating Justin Snaith on a superb Gr1 double last Saturday.

The fact that his horses didn’t have the easiest of passages would not have been lost on him and it will be comforting that the Clairwood mile is probably one of the fairest in the country.

Greyville has proven a bit of a lucky dip superway in recent weeks and there will be no such nonsense at Clairwood with its long run in. 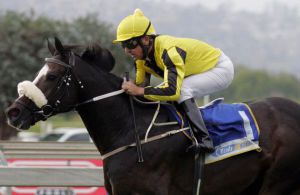 That said, he will have to overcome a bent on revenge Capetown Noir and the brilliant are Beach Beauty who doesn’t know how to run a bad race.

Yorker comes in here off a superb victory in the Gr1 President’s Champions Challenge at the end of April and has his first run at Clairwood. His last try on a right handed track was his unplaced effort in the L’ Ormarins Queens Plate.

There is something about his performances over a mile that do give us a little cause for concern though. Take the Horse Chestnut Stakes run.

Dean Kannemeyer’s Capetown Noir travelled by air from the Cape and did everything but beat Yorker. The son of Western Winter cost himself lengths in the long Turffontein straight by hanging right out to the outside and finished hard up against the outside rail.

In the end there was nothing in it.

This will be his first try at Clairwood and everything points to him replicating his best mile efforts at his home course. Let’s face it, Capetown Noir has never produced his best efforts at Greyville and his two length third behind Beach Beauty in the Drill Hall Stakes was a cracker in the circumstances.

There is talk that Capetown Noir will not run in the July and his Dubai passage is provisionally booked.

His stablemate Ice Machine has lost form and was seven lengths behind Beach Beauty in the Drill Hall. He will prefer this trip and is the kind of horse that upsets from time to time when on song.

Dennis Drier’s champion mare Beach Beauty was a brilliant winner of the Drill Hall Stakes and holds both Rio Carnival and Capetown Noir on that effort. She knows this track well and ran a very smart second to none other than Variety Club in this race last year. Against her is that she is poorly drawn.

Sean Tarry is always a factor in these big races and he will have an eye on July qualification with both of his.

Piere Strydom elects to ride Whiteline Fever, who comes in off a great third behind Normanz in the Gr1 Golden Horse Sprint. That was a commendable effort seen he lost a shoe in running and he only needs to repeat his running on fourth behind Variety Club last year.

His stablemate Pomodoro, set to go to stud later this season, is ridden by Weichong Marwing and this will be his fifth run after a break of ten months following his unplaced effort in the July. Pomodoro is a classy fellow but needs to show that he is on his way back to his better form with a big effort.

Justin Snaith’s duo are bound to be competitive and Jet Explorer should relish his first attempt at Clairwood, which is bound to suit his racing style. The son of Jet Master ran out of his skin to finish a flying third in the Queen’s Plate but failed to fire in the Met. His return run would have been a sharpener and he did little wrong when looked after for a five lengths unplaced Drill Hall Stakes effort. This will be more his game and he will strip a lot fitter.

The enigmatic Dynasty gelding Run For It ran a fair return race after a six month break when just over two lengths behind Silver Age last time. Kevin Shea has deserted Ice Machine in this gelding’s favour and he will be running on strongly late in the race on his best performances at the top level.

Any lurkers in the pack?

Joey Ramsden has had a quiet KZN season to date and King Of Pain is capable of turning that around. The son of Greys Inn has been rested for 16 weeks but is a factor on his Green Point Stakes runner-up spot to Ice Machine. Regular man Bernard Fayd’herbe rides him from a 10 draw.

Glen Kotzen’s Jet Belle found her best form last time with a cracking late burst to win the Gr3 Poinsettia Stakes. That was over 1200m, a distance considered short of her best and she should improve further over this trip. She does appear to have quite a tough task at the weights though.

Astro News hails from the Charles Laird yard and is a strong and very game son of Silvano. He did run rather poorly though in the Betting World 1900 and he does not inspire any confidence taking on the best here.

Mike Bass’ Castlethorpe has pulled a good draw at last but he was slow out and ran a shocker in the Golden Horse Sprint. He has been here before but cannot be recommended with any confidence.

Jeff Freedman’s Silver Age is a lightly raced five time winner. He came up on punters after a six month rest when winning his last start but looks out of it on the level weight terms against the big guns.

There will be little to choose between the top three.

If Capetown Noir is allowed to unwind and use the long straight to his advantage he could be the one to beat.

But Yorker and Driers mare are top class.