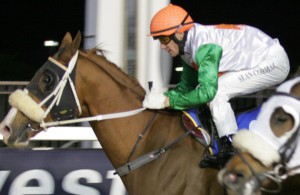 Ashburton trainer Paul Gadsby doesn’t have too many feature race prospects in his yard but he has done a fine job with keeping Roy Moodley’s white socked chestnut Royal Colours on the boil for four months.

Things may have gone awry for the connection’s plans on Sunday after it was announced that Gold Circle switched his engagement from turf to the polytrack and reduced the distance from 2400m to 2000m.

But it was no sweat for the versatile galloper, who continues to impress at every appearance.

Royal Colours registered his sixth win on the trot in the MR 80 Handicap, a sensational run that commenced with a modest win off a rating of 61 over 2400m at Scottsville on 20 July 2014.

Up to that point the 4yo gelding had run eleven times with six place credits, but looked a very average stayer at best, frankly.

But since then he has stepped up to every test and with the handicapper treating him kindly – he doesn’t win by further than he really has to – he looks to have plenty in the tank.

He is also versatile and has won half his races on turf and the balance on the poly.

Sean Cormack has been aboard at five of his six wins and the top jockey appears to enjoy playing poker with his opposition and only asking Royal Colours at the very last moment for his effort.

Royal Colours was bred by owner Roy Moodley and is by Danzig stallion Bezrin, who also sired Bezanova, winner of Saturday’s Gr2 Charity Mile. He is out of the Western Winter mare Ruby Winter.

Moodley’s silks were also worn to victory at Turffontein on Saturday when Paul Lafferty trained Harry’s Son trounced his field in the Gr3 Graham Beck Stakes.

Son Of A Gun