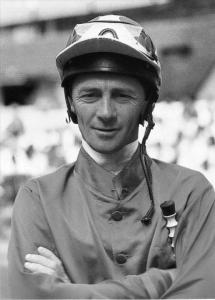 Gold Circle paid tribute at the meeting, as they do on an annual basis, to South Africa’s all-time greatest jockey and eleven time SA and English champion, Michael Roberts, who rode his first winner at the track, some 45 years ago.

It was an auspicious day all round, with a host of parallel celebrations.

The racing operator’s brand ambassador Bill Lambert, celebrating his own birthday, was on course to hand over the feature trophy to Muzi Yeni, whose fourth win it was in the Michael Roberts Handicap.

Roberts has trained the winner of this race twice and ridden the winner three times.

A visibly emotional Roberts, who was also celebrating his and wife Verna’s 38th wedding anniversary,  thanked the industry and all those present for the honour and acknowledgement.

The feature race named in his honour, attracted a field of thirteen, with Sean Tarry’s Tiger’s Retreat attracting the money and eventually jumping favourite after being backed from 6 to1 into 22 to 10. After looking dangerous at the 400m marker, the son of Tiger Ridge failed to fire and fell away as Muzi Yeni brought the handily weighted Royal Zulu Guard through the centre to win a good race from the fast-finishing Joshuas Crown, with pacesetter King Neptune staying on nicely for third.

Duncan Howells, who saddled three winners on the afternoon, said that he was in two minds whether to run Royal Zulu Guard.

“I ran him last week and the pace was so slow, it was little more than a gallop. I left him alone this week and he brought his A-game here today. Thanks to Roy Moodley – the game needs people who invest money in it and it is great when good owners reap the rewards,” he said.

Muzi Yeni added: “ I was sitting in the box-seat and we were going slow. I set him alight early in the straight and I knew we would get away from them.”

The Duncan Howells trained Royal Zulu Guard, a Magic Millions graduate, was bred in Australia by Glastonbury Farm and is a son of Rock Of Gibraltar out of the once winning King’s Theater mare, Ceol Na Sraide. 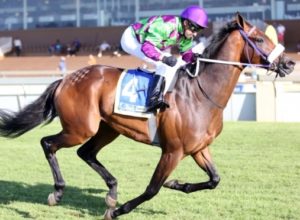 Surely the most impressive winner of the day title belonged to the husband and wife combination of Alec and Lezeanne Forbes, who won the MR 78 Handicap with John Jones’ Silvano gelding, Run Rhino Run.

He spread-eagled his older opposition and an excited Alec Forbes suggested afterwards that plenty would be heard about the smart looking 3yo, who was still learning how to race.

Despite running very green he won unextended and Forbes said that he had hit the front early as ‘nothing could go with him.’

Put this one in the black book.