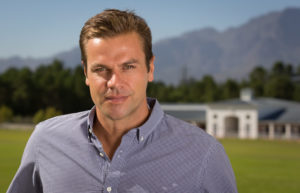 Given that I get to spend time with some of the best people and horses in the business and get paid for the privilege, it’s safe to say that I love my job. However, some days are just a bit more special than others.

BSA’s brand new Cape sale rolls into town on Sunday, 22 February and is being hosted at the Val de Vie Estate in Franschoek. Estate marketing director Ryk Neethling was kind enough to make time in his schedule to talk me through the new venture.

The racing world can be a little insular, but even I know that Ryk was part of the four man team that broke the 4 x 100m relay record at the 2004 Olympics. The fact that he’s easy on the eye is hard to miss and telling my girlfriends that I was meeting him prompted a bit of good-natured teasing. Ryk has clearly been brought up with the sort of old school values that would have my grandmother nodding approvingly and saying ‘ordentlike seun’. He is as tall and physically imposing as one might expect from an Olympic gold medallist, but the handshake and welcome are attentive and genuine.

Of course, being on first name terms with the likes of Felix Coetzee and Piere Strydom means it takes more than a gold medal to impress me! It remains an eternal mystery how our riders can be at the top of their game for decades at a time and never achieve the recognition that other sports people do. But that’s a debate for another day. While one wouldn’t necessarily put a jockey and an Olympic swimmer in the same category, the thing all professional sports people have in common is the single-minded focus to be the best at what they do. Aristotle once said ‘We are what we repeatedly do. Excellence, then, is not an act, but a habit.’ It is a habit Ryk has clearly acquired. The only difference is that the energy is no longer directed at excellence in the swimming pool, but at the management and development of Val de Vie. Val de Vie is the brainchild of Martin Venter who wanted to develop luxury real estate. He spent two years travelling the world, researching and gathering ideas before purchasing the Franschoek property in 2004. It took a further 2 years before construction started (and it is well worth seeing ‘before’ pictures of the original site to understand the scale of what has been achieved). All of which tells you that it has been planned and executed with meticulous attention to detail – right down to the lawns, which are all Cynodon dactylon, rather than the alien kikuyu which is being phased out by Nature Conservation. Ryk got involved when he was drafted in to do some advertising for Val de Vie’s first extension. He says he fell in love with it on sight and it is not a throwaway statement. He purchased a site, built a house, developed the on-site Swim School and even created his own wine label – in short, he bought into it wholesale and has become so involved with the estate that he is now one of the shareholders. He originally hails from the Free State but says, “There are few places in the world that can compare to the natural beauty of the Western Cape. Pretty much anywhere in the Cape is amazing. Benjamin Franklin said, ‘A house is not a home unless it contains food and fire for the mind as well as the body.’ To me that means a home is where you go to receive love and rest and is where you are able to recharge.” It is appropriate then, that the Franschoek estate is named ‘the Valley Of Life’. 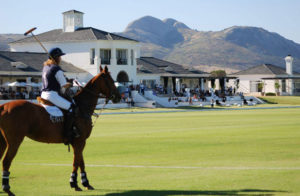 While Val de Vie is known for its polo club, one gets the sense that it is an estate that happens to have a polo club, rather than a polo club that has an estate built around it. Ryk agrees. “Probably about 8% of the residents are polo players, but we’re not a polo estate any more than we are a wine or golf estate. The equestrian aspect fits in with the sense of space and country living that the estate is all about – and seeing horses out for morning exercise or polo practice is a lot nicer than golfers walking past your house all the time.” How refreshing not to hear marketing jargon from a marketing person!

They cater for all equestrian disciplines and the facilities include 64 stables, 2 polo fields, a 60x60m all-weather arena, paddocks, lunge rings, trotting tracks and trails all over the estate. The restaurant is gorgeous and quite imposing at first glance, but on closer inspection the leather couches are suitably battered and the tables and chairs are just the right side of rustic to make them user-friendly and inviting.

The safest house in Africa 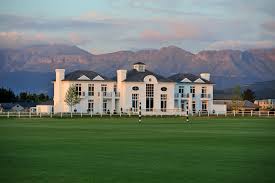 Perhaps that’s what I like most about the estate as a whole. While it is pristinely smart and well-kept, it still feels lived in, unlike some, more sterile holiday developments that are only used seasonally. Ryk explains, “After the 2008 crash, the second property market just about died. This is a primary residence development. The people who buy here, do it because they actually want to live here. There’s an indoor swimming pool, on site gym, pre-school, restaurant, function facilities and clubhouse. Mountain biking is taking off as an adventure sport and we are surrounded by four different mountain ranges, there are two kilometres of Berg River for fly-fishing as well as five lakes stocked with fish. And the recent acquisition of a portion of Pearl Valley gives us access to one of the best golf courses in South Africa. It’s just a very nice outdoor lifestyle.” And it is not just appealing to locals – in 2013 Perfect China, a 51% shareholder of Perfect Wines, purchased the Le Huguenot wine cellar as well as the attached 25 ha wine farm and historic manor house. “The most important aspect is safety. You have all the benefits of space and a country lifestyle – even a wine estate – while being totally secure.” Security is key and Val de Vie’s Polo House won the accolade of the Safest House in South Africa at the 2013 International Property Awards in Dubai.

They are just about to start on their ‘polo pads’, a section of smaller, free-standing houses, to be designed by celebrated Cape architect Stefan Antoni, but it is the latest acquisition of neighbouring Pearl Valley’s Phase II that has got Ryk particularly enthused. The new area will be developed into a series of ‘gentleman’s estates’, ranging from between 3 and 6ha each, allowing enough space for a house and a few stables. The new ‘lifestyle farm’ concept will launch in April. But I am not here to talk property. 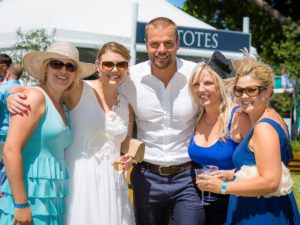 Ryk is a hit at the Queen’s Plate

Ryk is a familiar sight on big race days such as the L’Ormarins Queen’s Plate and the J&B Met, so he’s not a newcomer to the racing scene. He says “Through going racing I’ve developed an appreciation for horses and what they accomplish as athletes and I know a few of the trainers.” He says he has been offered a couple of horses, but hasn’t bought one yet. So why a horse sale and why here? “Like most things, it didn’t happen all at once. We’d been talking to Susan (Rowett) about it on and off for a few years, and it’s finally all come together. We’ve got a great, very professional events team and we’re used to catering for flagship events like our Veuve Cliquot Masters Polo Tournament (coming up again on 7 March). Plus we’re a farm and an equestrian facility – it seems an obvious place for a horse sale, really.”

Of course, polo ponies are one thing, 100 yearlings quite another, but the team have been hard at work creating a sales complex. Roads have been laid, walkways levelled, viewing areas constructed and stables erected. While stables near a restaurant and residential area are generally something of a fly trap, even this aspect has been addressed. Jenny van der Hoff from the No Fly Zone is pre-treating the area, the bedding and plant beds with efficient microbes and all the material brought onto the site will be recycled. The sales ring is being constructed in the ballroom, which is a little on the cosy side, but will keep the focus on the ‘mane’ attraction – the horse, rather than the hors d’oeuvres. 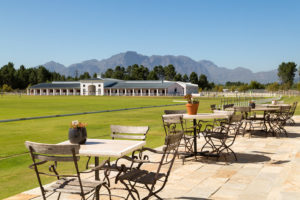 While BSA don’t generally go in for big parties and lavish entertainment, there will be a 4-goal polo match on Sunday morning and the pavilion’s restaurant and generous veranda allows ample space for lunch and refreshments. There is a strong catalogue of yearlings, with the select portion to be paraded in front of the pavilion at 13:30. Bidding gets under way at 2pm.

It seems superfluous to say that someone who has spent his life in pursuit – and achievement – of excellence, should be impressive, but I’ll say it anyway. The well-groomed exterior is simply a ‘luxury feature’ to go on top of a very serious and determined professional, who knows what it takes to succeed. They say if you fail to plan, you plan to fail. Looking around the beautiful estate, you get the feeling Ryk never fails to plan. Much like his wine, marketed under the slogan ‘a clever wine with a great body’, it’s obvious that the concept looks good, but I have a feeling it’s going to deliver too.