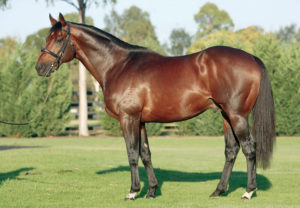 The Australian breeding industry saw the end of an era this week with the announcement that former champion sire Encosta De Lago was retiring from stud duties.

A top class racehorse who won three Group races (including the Gr1 Vic Health Cup) in just eight racetrack outings, Encosta De Lago was by far and away the best sire son of former French champion sire, Fairy King. A full brother to Sadler’s Wells and himself a top class sire in his own right, Fairy King had a number of top class sons to his credit, such as Helissio, Turtle Island, Falbrav and Oath, but none managed to achieve anything like the same level of success at stud as did Encosta De Lago. 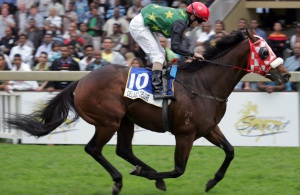 The stallion also enjoyed plenty of success with his South African based runners. From 32 runners in this country, Encosta De Lago has been represented by 25 winners – a total which includes 8 stakes performers. Encosta De Lago’s best local representatives include champion 2yo Delago Deluxe and Derby winner Dan De Lago – with both colts having subsequently been retired to stud, in Australia and South Africa respectively. Their paternal half brother, Safwan, was another decent local performer in this country, with the gelding’s best performances including a memorable dead heat in the Gr2 Betting World 1900 of 2011. 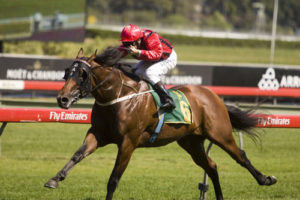 One of the stallion’s most brilliant sons, Northern Meteor, showed early signs that he would become an exceptional stallion. Sadly, however, the top sprinter died leaving just three full foal crops behind him. Northern Meteor, sire of the talented South African 3yo, Mitraad, was Australia’s leading first crop sire of 2012-2013. His first crop has already produced three individual Gr1 winners while his second crop includes Gr1 Caulfield Guineas winner, Shooting To Win. Northern Meteor’s paternal half brother, Manhattan Rain, a Gr1 winning half brother to legendary sire, Redoute’s Choice, has made a pleasing start to his career, currently ranking as the second leading second crop sire in Australia.

The Encosta De Lago impact suffered a further loss when the promising Beneteau (by Redoute’s Choice out of an Encosta mare) died in 2013 – he is Australia’s leading first crop sire this season with his first runners including Gr3 winner, Prompt Return. 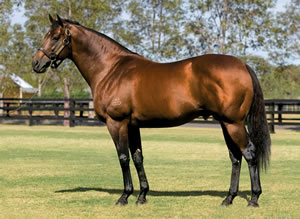 Encosta De Lago, who is closely related to former Australian Champion Sire, Flying Spur, shuttled one season to Ireland. His stud fee rose from AUS $8,500 to AUS $302,500 at one stage, although it had dropped in recent years to AUS $38 500.

Encosta’s statistics more than matched the hype surrounding him. At the time of writing, he has been responsible for 105 stakes winners, of which 69 are Group winners – nearly 6% of his foals were black type winners, more than respectable stats for a period which extends over nearly two decades. He was extremely successful at the highest level, with no fewer than 22 of his runners capturing at least one Group 1 contest and also sported a good Average Earnings Index of 2.05. No fewer than 22 sons or daughters of Encosta De Lago earned $1 million plus – a tribute to the durability and class that their sire passed on.

There can be no decrying Encosta De Lago’s considerable merit as a stallion in the Southern Hemisphere. His offspring, who have at the time of writing amassed over AUS $140 million, include champions in Australia, Hong Kong, New Zealand and South Africa, and he is also shaping up to be a highly successful broodmare sire, while the likes of Manhattan Rain and Northern Meteor’s son Zoustar suggest the Encosta de Lago influence will be felt strongly in Australia for years to come. But what of his Northern Hemisphere track record? Encosta De Lago’s reputation rests largely on the tremendous dynasty that he founded in the Southern Hemisphere, but the statistics suggest he could have been underrated in the North. His 180 NH runners include 111 individual winners (58%) and his offspring included 12 black type winners (or 6%), which suggests Encosta De Lago’s stock were equally successful in both hemispheres. His figures were not helped by the early and tragic death of his top class son, Mutahadee, runner up in the Gr1 Dubai Duty Free of 2012, where his victims included seven individual Gr1 winners. Encosta De Lago’s other black type performers in Europe and North America included talented filly Qushchi and Gr1 French St Leger runner up Miss Lago.

Farewell To The General