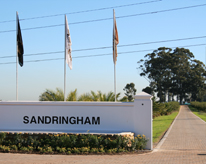 The last regional yearling sale to be held in the Cape by BSA was the 2011 Cape Summer Sale. It was held at the decidedly rustic Agri Expo grounds at Sandringham. It was hellishly hot with little in the way of facilities. The sales topper was Hammie’s Hooker at a very reasonable R360k and the 150-strong catalogue included last year’s Dubai World Cup hope, Sanshaawes, at a bargain basement R30k. The beer was warm and the food was cold, but somehow we all managed just fine.

And then along came CTS. These days it’s hard to imagine life before the Convention Centre, air-conditioning and craft beer, but once you’ve had sushi at a sale there’s no going back. Antes have most definitely been upped.

So Sunday, 22 February 2015 saw the return of the BSA’s regional yearling sale, this time at the brand new venue of Val de Vie. With arguably one of the prettiest settings available, a polo match, one of our top sportsmen at the helm and some new tech, there was a lot to look forward to.

An untouched piece of veld seemed an ambitious choice of venue, but a fellow scribe once opined “If your horse is good enough, you can sell it in the desert in a sandstorm at midnight.” And Val de Vie is hardly the desert.

So did it deliver?

If one made a direct comparison with the CPYS, then in some areas I would have to say no. However, this was never intended as an answer to the CPYS, but rather as a continuation of the old Cape regional sale, with some added fizz in the form of a select section. As there seemed some confusion about how the it all worked, this seems as good a time as any to explain.

The select section was based on the old ‘green pages’ of the National Sale, with two important differences. Firstly the breeder nominated the horses they felt were select. The second difference was the cost. There was a higher entry fee for the select session, with the monies raised paying for the pre-sale lunch. 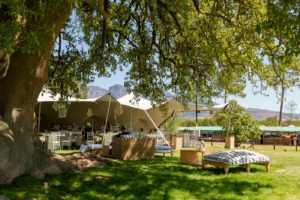 The stable yard. It was glorious. The gorgeous old tree at the entrance had seating arranged under its generous branches, there was a Bedouin tent with more seating, a bar and the unimaginable treat of a coffee station offering half decent cappuccino! The weather played along and was not as hot as it could have been (Paarl in February can be murder) and the trees between the shed rows and seating dotted around, created a lovely, comfortably rustic atmosphere that made you want to stay and chat (so much so that I ran late for lunch). The ‘regional’ label saw entries from breeders that don’t always make it to the bigger sales, making it even harder to tear myself away as there were so many people to chat to. 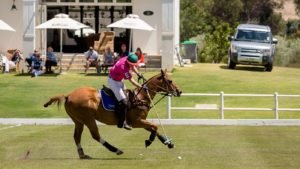 The main pavilion building is lovely with a large, spacious restaurant, well-stocked bar, generous veranda and plenty of outside seating, which all added up to an inviting, gentrified atmosphere. I grabbed a couple of books from Cally Hotson in the foyer area, the polo featured our champion trainer Justin Snaith playing old racing inmate Royal Bounty and it was a joy to have the leisure and racing communities brought together like the Cape Hunt days of old.

Lunch was scheduled for midday, but the leisurely atmosphere meant that things started a little later than planned. It may be an idea to do the hospitality on a different day. Lunch and the sale was hosted in the ballroom and I’d have to concur that most folks were a bit cramped for galloping room. In fairness, I believe there weren’t too many RSVP’s received, presenting a logistical challenge for the organisers. However, ‘n boer maak ‘n plan and with most folks fed and watered, and the select parade cancelled to mitigate the overrun, the sale got under way.

I was expecting the long walk from the stable area to be a challenge – the horses had to walk from the stables, around the far side of the clubhouse, down a bank onto the polo field, across the front of the clubhouse, back up the bank to get to the club house level and then up a ramp and into the building. But I worried for nothing as that all went pretty well and Malan and his faithful crew were on hand to chaperon any nervous youngsters. The sales ring was set out at the far end of the ballroom and although the horses coped admirably, the close confines and low lighting made it difficult to see the horses properly unless you were seated close by. However, the veranda with the loungers, cushions and extra seating offered an unparalleled view of the yearlings waiting their turn and it really was glorious looking at horses in that beautiful setting. Graeme Hawkins did sterling service on the rostrum and we were even treated to a bit of Sinatra!

With a few notable absentees, there was a spread of vendors and buyers, while a fair number of people just came along for a look. Sensible folk know that horses don’t care how they’re bred or where they’re sold and plenty left the politics at home and came prepared to do business.

Opinions varied on the depth of the catalogue, but the 100 or so lots seemed spread across the spectrum in terms of quality, which was reflected in the prices. John Freeman secured the sales topper, a Dynasty colt from Varsfontein, for R1,2mil and Hassen Adams went to R950k for a Gimmethegreenlight colt from another famous Varsfontein family. The Archipenko colts drew a lot of interest outside the ring and I was surprised to see them go for a modest R150k each.

There seemed to be a reasonable middle market – that vital sector that so often goes missing at the bigger sales. I think most buyers got value for their money, although a number still found it hard to buy and said the ones they’d wanted had gone above what they were prepared to pay. Overall vendors seemed to be reasonably happy, although a good few felt that bargains were had. But such is life. Unlike the recent changes in parliament, happily we still operate on the premise of willing buyer, willing seller! John Freeman, who signed for the R1,2 million sales topper lot 10, a Dynasty colt out of Jet Master mare, Kiss And Fly was delighted with his purchase. He commented, “He’s a Dynasty, which one always has to respect. He’s still a little immature, which I like – one has to use a bit of imagination – and he comes from a female line that one has got to love. It’s a line that’s not had the best of luck so far, so hopefully this will bring a change of fortune.” Regarding the sale, he said “I think they’ve done a good job. They needed to create a buzz and the select section was innovative and did the job.”

Varsfontein Stud manager Carl de Vos concurred. “He is a lovely horse, an extremely good walker and there is lots to come. He is a half brother to Kiss Me Hardy and will still develop a lot more.” Varsfontein were responsible for the top three lots overall and de Vos said “For a first time, I think it went very well. They had to try and build something out of nothing, so it obviously wasn’t perfect, but the horses settled in well and from a buyer’s perspective, I think it had a lovely atmosphere. It was supposed to be a regional sale with a twist and bearing in mind that it was put on by request of the breeders, I think the TBA will assess how it went, see what people did and didn’t like and make some decisions on how they want it to go forward.”

TBA CEO Kevin Woolward was a little weary, but positive at the conclusion of the sale. “From our perspective it went very well. There was a strong middle market and we’re happy with the average of just over R200k. It was a bit slow to start with, but in the end it exceeded our expectations.

“We were happy with our live streaming and have signed up with Antfarm to cover our sales for the rest of the year. It’s a brand new sale, we were running a new IT system and we had the new payment system, so there were a few problems, but overall we are happy. Jenny van der Hoff and the Val de Vie staff did a magnificent job of preparing the sales yard. Again, there are a few things to improve on such as the walkways, which we’re aware weren’t perfect, but given the timeframe, we’re very happy with what we managed to achieve.”

“The breeders have generally seemed very happy with the venue. We’ll sit down and critically review everything and obviously there will be things to learn from and change for next year, but overall we think it was a positive sale. Some of the breeders had concerns regarding the costs, so I’m very happy to report that we have shown a small profit. We understand that payment is the all-important bottom line and we have been very strict with buyers’ cards. Hopefully that will translate into better and more prompt settlement.”

So what did I think? As with most things, I liked some aspects, while there’s room for improvement in others. It’s a major step up from Sandringham, and added a lot of gloss without improving it out of the reach of Joe Public. Any new sale is a learning curve for organisers, vendors and buyers alike. Each sale develops its own character as it goes along and vendors and buyers need to adapt their eye and expectation accordingly.

The obvious and to me, most attractive innovation here was the option to offer a ‘select’ (or National) horse and save yourself the trouble, expense and risk of trekking all the way to Joburg. You run the risk of seeing that reflected in the price, but faint heart and all that. It’s also an option for non-National types. Other attractive aspects are that ‘no reserve’ horses that pass through the ring unsold, don’t attract any commission and vendors pay 7% on buy backs (rather than the standard 8% comm). Lastly, any horses that are withdrawn, but that meet the inspection and qualification criteria, have the option of going to Nationals.

If lessons are learnt and applied, then I think we have the potential for something quite fun that could tick a lot of boxes both for vendors as well as for  buyers. Which is what it’s all about after all.