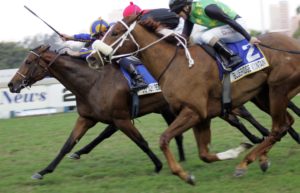 Do You Remember wins Woolavington

Peter Moody’s exciting international recruit Do You Remember was unveiled at the Cranbourne trials on Tuesday morning, but the stable is taking a ‘softly, softly’ approach with the South African mare.

The five-year-old, who won the Gr1 Woolavington 2000 run at Greyville in June 2013, was given an easy time of it in her Australian debut, finishing off nicely for fifth behind Lannister after being slow away in the first heat of the morning.

Do You Remember was bred and raced by leading Gauteng owner Mike De Broglio. She is by Silvano out of the Casey Tibbs mare, Festive Occasion.

Interestingly she was runner up in all three legs of the 2013 Triple Tiara behind Cherry On The Top. She also ran a courageous third in the Vodacom Durban July of that same year behind Heavy Metal.

Moody’s stable foreman David Eustace was pleased with the effort considering it was her first hit-out in more than a year.

“We’re just assessing her ability, we haven’t had long – we’re still trying to get to know her,” Eustace said.

“Her best form is over 2000m plus, she was third in the Durban July (Handicap), which is kind of like our Cox Plate, so that’s solid form.

“We haven’t pushed any buttons too hard, but we like what we see.

“She’s got a nice action on her, she stays well so she’s an exciting horse to have in the yard.

“As you’d expect her last furlong was her best, we’re pretty happy.”

More from: International, Racing & Sport
More on: Do You Remember, silvano