Saturday’s Gr1 Allan Robertson Championship winner surely confirmed herself as the leading contender for Equus honours for two-year-old filly with a workmanlike victory here. Entisaar is certainly bred to be a world class two-year-old – her sire More Than Ready having previously sired two winners of the world’s richest juvenile race, the Golden Slipper – a race won by Entisaar’s broodmare sire Catbird back in 1999.

More Than Ready (Southern Halo) is a sire with a superb reputation as a sire of high class juvenile talent. Champion Sire of Two-Year-Olds in both Australia and North America previously, More Than Ready’s 140 plus stakes winners include five previous Gr1 winning juveniles, including Golden Slipper winners Sebring and Phelan’s Ready, as well as 2014 Champagne Stakes hero Daredevil. 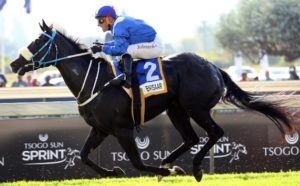 Entisaar, the 16th Gr1 winner for her sire, is also bred on the hugely successful More Than Ready/Danehill cross, responsible for such outstanding Gr1 performers as Benicio, Dreamaway, More Than Sacred, Perfectly Ready, and one of Australia’s leading young sires, Sebring. The filly is out of the Gr3 placed mare Purrpurrlena, who herself is intensely inbred to the great sire Danzig, through Danehill sire Catbird and through Danzig son Snaadee- Purrpurrlena’s maternal grandsire.

Perhaps tellingly, none of Entisaar’s first three dams won over further than 1600m, although the 2015 Allan Robertson victress does trace back directly in female line to former Gr1 VRC Oaks winner Waterlady. Seventh Rock is also continuing the great success enjoyed by his sire Rock Of Gibraltar in this country, with “The Rock”’s past Scottsville scorers including not only Seventh Rock himself but also Alboran Sea, winner of the 2014 Gr1 Allan Robertson Championship and runner up in Saturday’s Gr1 City of Pietermaritzburg Fillies Sprint. Rock Of Gibraltar is also responsible for Rich Girl, who finished second to her paternal half sister Alboran Sea in last year’s Allan Robertson.

Seventh Plain, the second Gr1 winner produced by a National Emblem mare – this season’s Gr1 SA Derby winner Legal Eagle being the first – is out of the well above average racemare Amber Plain, whose six wins all come over trips up to 1400 metres. Amber Plain’s third dam is German Oaks winner Oraza.

Interestingly enough, Seventh Plain’s third dam is by the great Brigadier Gerard, one of history’s greatest racehorses (and a winner of 17 of his 18 races), but a sad disappointment at stud. Brigadier Gerard’s influence today is felt mainly through the broodmare daughters of his grandson Lord At War (himself damsire of 2002 Kentucky Derby winner War Emblem and Pioneerof The Nile, sire of 2015 Triple Crown hope American Pharoah). A daughter of six times champion 2yo sire Captain Al, Saturday’s Gr1 City Of Pietermaritzburg Fillies Sprint winner Carry On Alice is one of six Gr1 winning daughters for her sire (also the sire of 2015 G1 Allan Robertson runner up Princess Royal). This tally includes Captain’s Gal –winner of the Gr1 Fillies Sprint back in 2010.

Carry On Alice will certainly make up into an intriguing stud prospect – not only is she by an outstanding sire in Captain Al, but she hails from an excellent female line. One of just two registered foals for her dam, Carry On Alice is out of the top class racemare Carry On Katie, a daughter of triple champion sire Western Winter whose four career wins included the Gr2 Debutante Stakes, and who also finished second in the Gr1 Paddock Stakes.

This is a top class family, whose other notable members include Gr1 SA Derby winner Kale (Elliodor) and former Equus Champion 2YO, and promising sire, Kildonan (Rich Man’s Gold).

Captain Al has made a tremendous start to his broodmare sire career (he is already damsire of the Gr1 winning 2yos Potent Power and Same Jurisdiction), and one can but wonder what the residual value of his beautifully bred, and dual Gr1 winning, daughter Carry On Alice. Captain Of All wins the 2015 Gr1 Tsogo Sun Sprint

One of two Gr1 winners on Saturday for Captain Al, Captain Of All is certainly bred to be a high class speedster. His sire won two of the Cape’s top sprints, the Gr2 Merchants and Gr2 Diadem, while Captain Of All’s broodmare sire Fard won the Gr1 Middle Park Stakes over 1200 metres as a juvenile. Captain Al well and truly dominated Saturday’s Scottsville meeting, with a pair of Grade One winners (Captain Of All and Carry On Alice) and a pair of Gr1 seconds (Princess Royal and Redcarpet Captain). His top class son Captain Of All, who looks set for a stud career in the not too distant future, traces back in female line to Casket, a daughter of champion sprinter and sire Drum Beat.