It is Gr1 Belmont Stakes time – a first for Mike de Kock and his team as New York prepares for the third leg of the 2015 Triple Crown at Belmont Park today. American Pharoah is the talk of the town and 10-1 chance Mubtaahij is seen by some as the outsider that could come to spoil the party.

Mike de Kock thinks that Mubtaahij has an excellent shot to make the board on Saturday. He has three victories and a second in five starts this year, including an eight-length victory in the Group 2 UAE Derby in Dubai on March 28. That field, of course, was not this field, but de Kock loves Mubtaahij’s “soundness of limb,” his good mind and his easy disposition.

He has traveled the world and raced horses in most corners of it, but somehow Mike de Kock never made it to New York City until now.

He was sitting at a round table with a white tablecloth at the Rock Center Café Wednesday afternoon, and as the draw for this Saturday’s Belmont Stakes unfolded on the site of an ice rink, Mike de Kock and his wife Diane looked a bit like cardboard-cutout tourists, their gazes fixed on Rockefeller Center towering above them.

“This is fantastic,” de Kock said. “What a beautiful city.”

Mike de Kock is 51, a world-renowned horse trainer from South Africa, and won’t be doing much sightseeing this week, other than going on a boat ride arranged by the Jockeys Club. 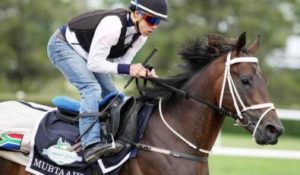 He is here on business, which is getting his Irish-bred 3-year-old, Mubtaahij, ready to run in the American Pharoah Invitational, also known as the 147th edition of the Belmont Stakes.

If de Kock isn’t the busiest, and most well-traveled trainer in the world, he’s on the short list. He races horses in his native South Africa, where he is regarded as the Babe Ruth of the barn set, and also in Dubai and occasionally in the U.S. He’s saddled winners in England, Singapore and Hong Kong. Saturday is his first Belmont, five weeks after he made his debut at the Kentucky Derby, where Mubtaahij ran eighth.

“Sadly, I picked this year (to have a horse in Belmont),” de Kock said. “You never know when you’re going to go.”

The truth is that Mike de Kock is not sad about having his 10-1 shot in this year’s Belmont Stakes, at all. He grew up around the sport in South Africa, and even served in the Equine division of the South African Defence. He loves the game, and loves greatness, and doesn’t want anyone to think of him as less of a competitor when he says that the field “is running for second and third, because I can’t see anybody beating American Pharoah.

The trip in the Derby went wrong almost from the start, de Kock said, and he believes that over a mile and a half, in just an eight-horse field, jockey Irad Ortiz Jr. will encounter far fewer obstacles.

Whatever happens, Mike and Diane de Kock, who pretrains the younger horses in the stable, seem determined to savor their first visit to New York. They are staying in splendor at the Garden City Hotel on Long Island, and are eager to see the big city from the water. De Kock is also eager to see if a Triple Crown champion emerges Saturday, and if racing finally finds a new legend.

Considering how much it would mean to the sport to see American Pharoah finish the job, Mike de Kock was asked if he’d feel guilty were Mubtaahij to spoil the ending, the way 12 previous upstarts have spoiled Triple Crown endings since 1978.