Captain Of All – seen winning the Diadem

Klawervlei have announced that superstar Captain Of All, South Africa’s top sprinter of 2014-2015, is set to retire to retire to the farm for the 2015 season.

As the first Gr1 winning son of the mighty Captain Al to retire to stud, the handsome Captain Of All is bound to hold plenty of appeal to breeders looking to produce precocious and speedy thoroughbreds and, as the joint highest thoroughbred racing in South Africa at the moment, he certainly looks an exciting addition to the local stallion band.

One of over 30 Gr1 horses sired by Captain Al (who could land his seventh consecutive 2yo sires list this season), the Riverton Stud bred Captain Of All ranked amongst the leaders of his generation throughout his career.

The Dennis Drier trained colt was an exceptional two-year-old, when winning or placing in all four of his juvenile outings.

Captain Of All’s most notable win at two came when accounting for a top class field in the Gr1 Tsogo Sun Medallion. Amongst the top class performers he beat that day were the Gr1 winners Kochka, Normanz and Willow Magic, as well as subsequent Gr2 Emerald Cup winner and millionaire Tommy Gun. Captain Of All also finished a creditable third, when again beating both Willow Magic and Normanz, in the Gr1 Golden Horseshoe over 1400m. Trainer Dennis Drier – produced the goods with Captain Of All

A winner of his sole start at three, Captain Of All showed he had trained on well at four, when he has, to date, won or placed in five of his six outings to date. He put up a stunning, weight defying performance when carrying top weight of 60 kgs to victory in the Tsogo Sun Sprint at his most recent appearance, where the magnificent colt conceded weight to, and beat, an outstanding field of South Africa’s very best sprinters.

Amongst those beaten that day were Daring Dave, who subsequently came out to win the Gr2 Post Merchants next time out, as well as such high class graded winners as Bichette, Chekilli, Kingvoldt, Moofeed, Normanz, and Willow Magic.

This season, Captain Of All has also landed the Gr2 Khaya Stables Diadem Stakes (over Gr1 winners Copper Parade and Fly By Night), and he also smashed the track record when waltzing home to victory (by seven and a half lengths) at Scottsville over 1000m.

To date, Captain Of All (who hails from the all conquering Roberto male line) has won or placed in no fewer than six graded races and has earned in excess of R1.7 million.

He will also be bidding to follow in the footsteps of such illustrious stallions as Captain Al, Dynasty, Elusive Fort, and Jet Master and become the latest locally bred sire to make it big.

Captain Of All’s pedigree also offers breeders the opportunity to use the services of a horse whose pedigree is free of Northern Dancer and Mr Prospector blood.

A R100 000 buy from the 2012 Klawervlei Farm Sale, Captain Of All will retire to stud following the running of the Gr1 Mercury Sprint later this month.

More from: Breeding, News
More on: Captain Of All, klawervlei

Diarise The National 2yo Sale 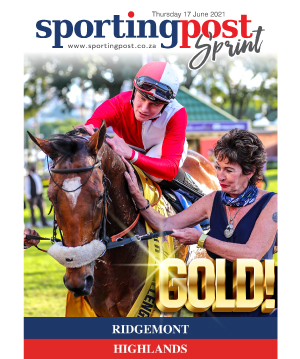