Dubai Racing Club have released the 13th Dubai World Cup Carnival programme, an 11-week schedule of international races worth US$38.9 million and staged at Meydan Racecourse.

Racing begins on Thursday January 7, 2016 and concludes on Saturday March 26, 2016 with the US$30m Dubai World Cup, the richest day of horseracing in the world.

All Dubai World Cup Carnival race meetings, which are broadcast live to millions of households, are scheduled for Thursday evenings apart from Super Saturday and the Dubai World Cup. 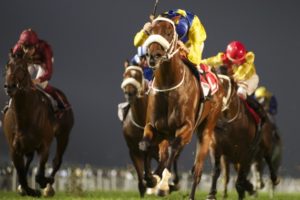 Super Saturday, the official prep day for the Dubai World Cup on March 5, will highlight the 2016 programme.

The race card will offer seven races valued at a combined $1.7m and headed by the Group 1 Al Maktoum Challenge Round 3 and the Group 1 Jebel Hatta.

“It isn’t surprising that Super Saturday has been a great producer of horses going on to be victorious on the Dubai World Cup programme three weeks later, that is what the meeting was designed for and it has certainly succeeded,” said Frank Gabriel, Jr., Dubai Racing Club Executive Director – Racing.

“More and more trainers travelling horses around the world are opting to have a local prep run prior to the main assignment and with so many winners coming from the third round of the Al Maktoum Challenge, the race is an attractive option for horsemen.”