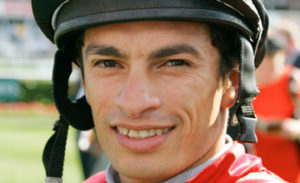 Silvestre De Sousa on Saturday lifted the trophy he has worked tirelessly since May 2 to get his hands on, with Lester Piggott and Richard Hughes presenting him with his 2015 Flat jockeys’ championship at Ascot.

De Sousa, who has come close to winning twice in the last three years, ended the season on 132 winners – 36 clear of his closest pursuer William Buick and donated £3,000 of his £25,000 prize for winning the Stobart-sponsored title to the stalls handlers.

He said: “It’s very exciting – I’m very proud. It’s just a nice position to be in. It’s been a hard season but it means a lot to me.

“I rode for two years in Brazil and that’s where it started. I’ve been here for 10 years now. It was hard in the beginning to break in, but I’ve had a lot of support particularly from the Northern trainers, especially Brian Ellison, and Mr [Mark] Johnston has been great to me.

“When I first came to Europe I just wanted to have one ride, to get a feel of the turf, and today – look where I am. It’s very special to have my family here. They are very important to me and it is a big surprise my mother flew over.

“It’s been a great season. My agent Shelley Dwyer has done a great job and I’d like to say a big thank you to everyone.”