When Richard Fourie, Douglas Whyte and Karis Teetan rode their winners at Shatin on Sunday – four in all with Fourie taking out the feature event- the Sa Sa Ladies Purse on Top Act- they were carrying on that great tradition of South African jockeys having such a huge influence on Hong Kong racing, something very much ignored and, too often, allowed to coast under radars like some well-kept secret.

What few realise is that South African riders owned the Hong Kong Jockey Premiership for over twenty years- OVER TWENTY YEARS- that included the thirteen consecutive year reign of Douglas Whyte, the seven Championships won by Basil Marcus in the Nineties when riding for trainers Ivan Allen and David Hayes, and that one year when, for reasons that might baffle some, Robbie Fradd won the Premiership during the 2000-2001 season. 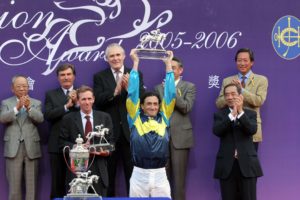 This complete dominance only came to an end three seasons ago when Zac Purton brought down the curtain on the Whyte Era. Even during those thirteen years when Douglas Whyte was the Joao Moreira of his time and riding trebles and quintets with consummate ease, Hong Kong was the showcase for other South African riding talent- the great Felix Coetzee and his incredible journey with the brilliant Silent Witness, Anthony Delpech and his partnership with the very much underrated and neglected Vengeance Of Rain, winner of the 2005 Hong Kong Cup and 2007 Dubai Sheema Classic, and trained by fellow South African David Ferraris, Anton Marcus, Pierre Strydom, Weichong Marwing, who will be remembered for riding Irridescence to victory over Ouija Board in the 2006 Queen Elizabeth 11 Cup at Shatin, Glyn Schofield and the incredible ongoing story of sheer guts and glory and resilience that belongs to the tough as old boots Jeff Lloyd. One of the best compliments paid to Gentleman Jeff was when one of his countrymen who he had beaten in a major race shook his head and said, “It’s bloody tough to get past that old bastard”. It still is. The Jeff Lloyd Story is a movie about triumph over adversity waiting to be made. 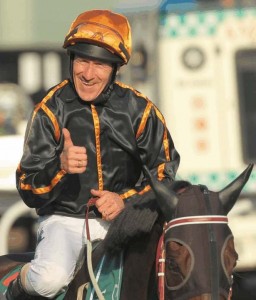 Going back in time, the person to be credited for opening the doors in Hong Kong to riding talent is colourful champion trainer Brian Kan-ping-chee.

Of course, Brian Kan is no stranger to longtime Hong Kong racing fans for his exploits on and off the track. Once, Hong Kong’s “Cups King”, Kan has also been in the news for misadventures with his Filipina domestic helper and, more recently, corruption charges. All that aside, it was “Yes I Kan” who broke the Australian stranglehold and, one could say, “manipulation” of Hong Kong racing that had grown to be something like the man-eating plant in The Little Shop Of Horrors. This was when he retained Bart Leisher as his stable jockey in 1988. The young South African hit the ground running by notching up winner after winner with his bold front-running tactics- orders from his boss. He also hit Hong Kong’s nightlife equally as hard and took the expression, Work Hard, Play Hard to another level. It wasn’t a surprise to see Bartie Leisher being carried out of the more popular bars and restaurants of what was then the city’s first “trendy” area- Lan Kwai Fong- but, as a rider, he was brilliant. Another winner for Bartie

“Bartie wasn’t a one-dimensional rider”, recalls Brent Thomson aka “The Babe”, who took over from Leisher as stable jockey for Kan after the South African’s horror fall. “Mr Kan wanted his horses ridden out in front, but Bartie could win from anywhere. He was also extremely generous to his family.” When asked what it is that has made these jockeys from South Africa adapt to Hong Kong racing so easily, apart from their experience riding the country’s very different tracks, both big and small, Thomson simply says, “Ask Felix (Coetzee) or Dougie (Whyte), and I’m sure they’ll tell you that it was their grounding at the famous South African Jockey Academy. It’s what has made them the very disciplined riders that they are with a terrific work ethic.”

Hong Kong’s favourite racing son Tony Cruz, who has retained both Whyte and Coetzee as his stable jockey, agrees. He adds that Basil Marcus and Douglas Whyte, in particular, were, and are, extremely good PR men. “I remember telling Douglas that if he ever wanted to be Champion jockey, he had to be as aggressive as Basil in how he went after the rides he wanted. Basil was a master at selling himself to owners and trainers. Douglas was a very quick learner”. As we head towards another HKIR Week and a new celebration of racing, what should be remembered are the exploits and dominance of these jockeys and the champion Hong Kong horses they have been associated with- Star Mark, Flying Dancer, Fairy King Prawn, Mr Vitality, Oriental Express, River Verdon, Privilege, Indigenous, Silent Witness, Electronic Unicorn and South African equine stars like London News, JJ The Jet Plane and Variety Club, pictured below, winning the Hong Kong Champions Mile in 2014 for the South African team of jockey Anton Marcus, trainer Mike De Kock and owners Ingrid and Marcus Jooste. The South African imprint on Hong Kong racing is still very much here when one thinks of the absolute perfection of Douglas Whyte’s ride on Secret Weapon last Sunday, the tactical guile of Karis Teetan to win aboard Invincible Fresh, and the South African connection behind Top Act – trainer Tony Millard and jockey Richard Fourie. And then there’s still Felix Coetzee. “You know, the Academy back home during that era when people like Dougie and I were there made us not only disciplined, it made us extremely competitive and ambitious. We were looking up to a rider like Michael Roberts, who left South Africa and became a champion rider in the UK”, he explains before mentioning his new role for the HKJC. This role is to mentor Hong Kong’s two ten-pound claimers Jack Wong and Kei Chiong, and that same passion and pride as a rider, and well known to his fans, comes through when he speaks of them: “I am on the phone to them after every race meeting offering encouragement and pointing out where they might have done things differently. Jack Wong can ride, and Kei is a very smart girl. She’s watching, taking it all in and constantly learning. My name is now associated with these two kids and I want to impart all that I can to them, and those young Chinese riders who will follow.” Felix Coetzee is passing his knowledge on

The South African connection with Hong Kong racing continues. The circle won’t be broken. And thank goodness for that. The combination makes a great team.

(with thanks to the RacingB*tch)