The trends of the global thoroughbred breeding industry were discussed on Tuesday, 26 January 2016 in Mumbai at day 2 of the 36th Asian Racing Conference. The session was chaired by Ronan Murphy, Chief Executive of The General Stud Book, Weatherbys Ireland, who kickstarted the panel discussion with a reminder of the fabulous, mature results from the world’s finest matings – successes on the global stage.

A diverse panel of experts reviewed the industry, opened by Jocelyn De Moubray, a bloodstock consultant and author of The Thoroughbred Business. Mr. De Moubray identified the current market position for the American and European yearling markets, especially in light of sharp declines in foal crops this century. “33 percent fewer foals were born in 2014 than in 2000, while German foal crops have dropped 46 percent, they are down 42 percent in the U.S. and Japan is down 22 percent.”

Still, Mr. De Moubray thinks the current market dynamics could yield a shift. “The European bloodstock market is close to an all time high. While depending on currency movements and new interest from China and South Africa, demand at the top could be more competitive. Still, the American market has more obvious potential for further growth.”

“The Indian 1,000 Guineas, 2,000 Guineas, and Indian Derby were first run in 1942 and 1943, and since then, Indian racing and breeding have not looked back in spite of having had several severe setbacks due to government policies which do not favour racing,” said Mr. Poonawalla.

“We operate under the model that good people make good horses. The JRA has established the largest training facilities in the main breeding industry area in Japan, hence, creating a special and key infrastructure to attract key talent to support this growth,” said Dr. Yamanobe.

While Japan still relies on the importation of broodmares, Dr. Yamanobe noted the number of imported stallions in Japan has dropped from a high near 30 in 1988 to more recent totals under five. 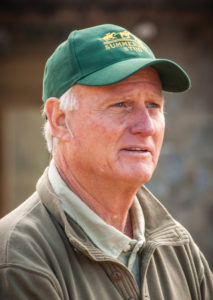 “When I first addressed the ARC in 1995, [South Africa] was home to 545 breeders, 158 stallions, the foal crop was north of 5,000, and I had a mop of blonde hair. In 2014, there were 148 registered breeders, 103 stallions, the foal crop was at 3,400. The attrition in South Africa has partly been due to the global financial meltdown, but much has to do with the frustration we have with our exports,” said Mr. Goss.

“We continue to face major headwinds in getting our horses to the jurisdictions of our trading partners out of an apparent fear that we may contaminate them with the African Horse Sickness virus,” added Mr. Goss. “We have never, ever exported the virus to any country. It is puzzling to me that despite the technological age and the vast investment we have committed to our export facilities, it is now more problematic than it has ever been to get a horse out of South Africa.”

Next to the session was Daniel Kruger, Manager of the German Thoroughbred Breeders and Owners Association, discussing that country’s unique programs designed to achieve success through concentration. “I think German breeding is successful because we concentrate. We have only 800 to 900 foals per year, and while you might find a good sprinter or miler in Germany, you probably won’t find a champion sprinter or miler. We concentrate on stayers,” said Mr. Kruger. “That is where we are good and strong. We are really specialized for long-distance horses and all our major fixtures for 3-year-olds and older are over the longer distance of 2,400 metres.”

Johnny Weatherby, Chairman of Ascot Authority and the International Stud Book Committee (ISBC), spoke of how the world’s racing authorities collaborate to enable a global standard to ensure the integrity of the thoroughbred breed. “This provides the foundation for a healthy, international breed,” said Mr. Weatherby. “Now as we look ahead, one of the principle challenges we face could be to the essence of the thoroughbred itself. Recently, following a discussion with the International Federation of Horse Racing Authorities and the breeding industry worldwide, we have given a clear message that any manipulation of the heritable genome could result in the removal of thoroughbred status. Thoroughbred production beats the latest drug.”