Despite losing his whip at the start of the R400 000 Gr2  J&B Urban Honey Stayers, heavyweight jockey Bernard Fayd’herbe was able to keep the Australian-bred Ovidio in the race for the entire 2800m to score a convincing win. The smart win by the 5yo son of Danehill Dancer was just another example how so much went right for the Justin Snaith team on their world record-breaking(so we believe, anyway) day of eight winners – six of which were on the trot.

Tabnews reported that pundits at Kenilworth Racecourse could not call to mind any stable having eight winners at one meeting, or the first six on a programme – and certainly no-one has done it at such a prestigious race day.

In fact, racing fundis couldn’t recall such a feat anywhere in the world and Tellytrack presenters started talking about a world record.

With fifteen runners jumping in front the stands, the staying race is always a crowd pleaser , although the Cape staying style of crawl and sprint would have again irked those with genuine stayers in the event.

Oh So Modus led them early from Zante and the fancied Solid Speed in close attendance.

Into the home run, Solid Speed moved forward powerfully down the inside as Ovidio got going as he weaved his way through runners on the outside. 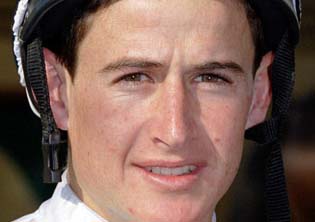 Bernard Fayd’herbe – kept his coll after loss of whip

In a top display of race riding, Fayd’herbe got him home under a hands and heels ride to beat Coltrane by 1,25 lengths in a time of 181,73 secs.

Last year’s winner Kingston Mines finished strongly for third, with Solid Speed hanging on to fourth – just ahead of Gallica Rose who only got going when the race was over.

Ovidio was purchased by James Bester Bloodstock for A$ 30897 at the Inglis Bloodstock 2012 Australian Easter Yearling Sale. He was described as ‘one of the cheaper horses we bought in Australia’by co-owner Hassen Adams.

He is a son of Danehill Dancer out the Red Ransom mare, Pre Nup – who was out of De Beauvoir.

Pre Nup won once and ran two places from 12 starts.

He looks to be maturing into a decent stayer.