Werther trounced what had been billed as the best field ever assembled for the Gr1 Audemars Piguet QEII Cup with a performance at Sha Tin on Sunday that left winning trainer John Moore and jockey Hugh Bowman elated yet surprised at the manner of victory. Last month’s HKGr1 BMW Hong Kong Derby winner powered away from world-class rivals to clinch a first international Gr1 triumph in the HK$20 million 2000m showcase, stretching four and a half-lengths clear on the rain-softened ground, a margin of success second only to Quicken Away’s seven-length demolition back in the pre-Pattern race days of 1990.

“I was never expecting that,” said a beaming Moore. “We did know he handled the heavy track in New Zealand and that it wouldn’t be a problem today – but that was beyond my expectations.”

Bowman said: “I had a suspicion after the Derby we would see a better horse against better opposition but I certainly didn’t expect him to perform to the level he did this afternoon.”

Moore is now eyeing further G1 targets at home and abroad. “Next we’ll go to the Champions & Chater Cup over a mile and a half here in a month’s time and Hugh will be back to ride him,” he said, adding with a hopeful smile and raised eyebrows, “then we’ll give him a break and I’ll be trying to pull the owner’s leg to go back to Australia for the Cox Plate!”

A frantic rush into the first turn saw half a dozen of the 13-strong field pressing for the lead in this year’s star-studded AP QEII Cup, enabling Bowman to position Werther mid-rank, one spot off the fence with race favourite Lovely Day within his sights. Helene Super Star settled on the front end and set an atypically strong tempo, one that had Brett Prebble’s mount toiling before the turn for home. 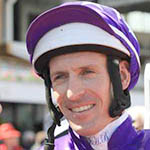 “He’d drawn the gun gate (5) today and he’s got gate speed, he can be up there, but when there was a charge of the Light Brigade early on, Hugh just said ‘well fellas, go!’ There were five or six of them that just wanted to be in the same place so he got the gun run in behind,” said Moore.

That early pace and a subsequent solid tempo played into Werther’s hands with the going rated officially yielding. The Tavistock four-year-old had already won a 2100m G2 contest on heavy ground in his homeland and placed second in a soft ground G1 South Australian Derby (2500m).

“What I loved was the consistent speed,” said Bowman. “We’ve seen before in Hong Kong the pressure early but then the pace comes off, but when that speed was sustained throughout it allowed me to give him every chance to be in a great rhythm throughout.

“We’ve gone a good gallop, but that’s what happens when you get a world class field. I basically picked them off. I was able to get on the back of Lovely Day, although I had to go back to the inside to do that, I felt I was travelling well enough to follow the rhythm wherever that was. He was certainly breathtaking when he went to the front.” When Blake Shinn drove Helene Happy Star to the fore on the turn for home, most eyes were on race-favourite Lovely Day cruising through an inside run under Joao Moreira. The Yasutoshi Ikee-trained six-year-old led at the 400m mark but the dual G1 winner toiled when asked to quicken, unable to stretch out on the rain-eased ground, all at sea as he drifted towards centre track.

Werther had no such issues. Bowman tracked Moreira’s move, loomed upsides at the 300m and pressed the button. The response was sensational. Werther accelerated emphatically and passed the winning post in isolation, stopping the clock inside standard at 2m 01.32s.

Lovely Day held on for fourth.

“I thought we saw a great turn of foot over a trip, a turn of foot we haven’t see him give since he ran here first-up at the 1600 metres on international day,” said Bowman.

“The reason you haven’t seen that turn of foot is because I’ve been riding him more tactically aware. I’ve had him up close; I’ve had him travelling a bit stronger than I did today. Today I allowed him to really relax throughout the race and we’ve seen the best of him.”

Heavy rain fell at intervals throughout the day but the prospect of world class horse racing drew a crowd of 32,788.

Mr. Winfried Engelbrecht-Bresges, the Hong Kong Jockey Club’s Chief Executive Officer, said: “We are more than delighted that despite the circumstances of the wet weather an enthusiastic crowd came to Sha Tin this afternoon to watch a fantastic edition of the Audemars Piguet QEII Cup.

Today’s attendance is the highest at this race meeting in five years and the day’s turnover is HK$1.346 billion, which is an increase on last year.

“We had a world class field of runners for the feature race and it was fantastic to see Werther confirm the tremendous performance of his BMW Hong Kong Derby win. We would like to thank all connections for bringing their horses today. We think the promotion of Hong Kong races to Part One in the international Blue Book will see more international Group horses coming to Hong Kong in the future.

Kimberley – In A Hole