Alan Greeff has another exciting 2yo on his hands and the very aptly named Tiger Ridge colt Oomph buried his opposition in a matter of strides with an impressive turn of foot to win the R150 000 Listed East Cape Nursery run at Fairview on Friday. Ooh so easy! Aldo Domeyer gives the thumbs up as Oomph cruises in (Pic – Coastal Photos)

Aldo Domeyer and trainer Alan Greef enjoyed a good Friday at the office with their Gimmethegreenlight debutante Beataboutthebush winning the opener. But nothing was more impressive than Oomph, who looks to be going places.

While there were only five winners in the field of ten, the manner of Oomph’s acceleration was breathtaking and Domeyer had him pacing it five lengths off pacemaker Refrain, and alongside market rival, Cape raider Soweto Moon.

Corne Spies’ PE form has been sparkling and their Bollemakiesie ran on strongly for second to pip maiden Story Of My Life. 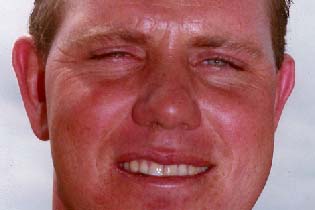 Alan Greeff – something special on his hands

The Snaith’s debut winner and 18-10 second favourite Soweto Moon shortened his stride at the 400m and fell away to finish tailed off.

The winner, another potential top horse in the making purchased by the Scribante family, is a R260 000 National Yearling Sale graduate

Unbeaten in two starts, Oomph took his earnings to R132 500 and was also the beneficiary of the rather attractive incentive of a BSA Added Value Stakes Bonus of R77 500.

Bred by Wilgerbosdrift and Mauritzfontein, Oomph is from the last crop of the ill-fated Storm Cat stallion Tiger Ridge and is out of the Not For Sale mare, Quintessential.

Laurie And His Empress