The super consistent Kildonan filly Beach Goddess ended the Cape season on a high for her title chasing breeders Klawervlei Stud when she produced a storming run to win the R250 000 Gr3 Champagne Stakes at Kenilworth on Saturday.

The bright winter sunshine that drenched the Southern Suburbs track was in stark contrast to the sombre mood that prevailed, with the Racing It’s a Rush flags flying at half mast – and the jockeys wearing black armbands in the opening event as a mark of respect for their popular colleague Christopher Puller, who passed away tragically during the week. Corne Orffer keeps Beach Goddess (outside) galloping to beat the late finishing Come Fly With Me in the hands of Robert Khathi (Pic: Wayne Marks)

The Gr3 Champagne Stakes saw a quality field of ten fillies line up to do battle over the straight 1200m and the track looked to have stood up well to the 62mm of rain that had fallen over the previous week.

With the going posted as soft and an average pen reading of 28, punters came for the speedy 3yo Victoria Lavelle, who went off an 18-10 fancy, and looked nicely in to end her season on a high. Replacement rider Grant Van Niekerk had the daughter of Captain Al out in a flash and she led from Neala and Acaciawood.

Into the final 350m Victoria Lavelle shortened her stride as the hard work on the soft ground took its toll, and Corne Orffer brought the year older Beach Goddess through with an explosive run down the middle.

Looking like she would go away to win well, Beach Goddess came under fire as substitute Robert Khathi got Come Fly With Me to chase and the Mike Bass-trained daughter of Jet Master was just 0,25 lengths short of giving the veteran what would have been a lovely Cape send-off. 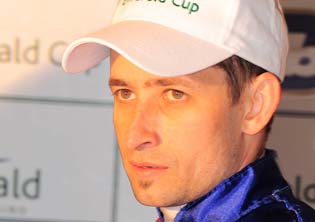 Acaciawood outdid her more fancied stable companion to run into third, with Double Whammy running a much brighter race after a quiet spell to secure fourth.

Victoria Lavelle had nothing to come late and ran a half length behind Double Whammy to finish out of the quartet.

The lightly raced Beach Goddess started her track career with Dean Kannemeyer, who saddled her to win two of her first three starts.

Brett Crawford had her in peak fettle on Saturday to produce a well-deserved first stakes victory. The speedy son of ill-fated stallion Rich Man’s Gold stands for a fee of R5000.