The legacy of the late, great US sire, Storm Cat, has been felt the world over. Current representatives of this potent stallion include triple US Champion Sire, Giant’s Causeway, his son, Shamardal, and grandson, Lope De Vega, writes Sarah Whitelaw.

One can but wonder what Storm Cat’s tragically ill-fated grandson, Scat Daddy (Johannesburg) might have achieved in a longer innings at stud. Not only is Scat Daddy sire of Saturday’s Gr1 Diana Stakes winner, Dacita, but he was responsible for a rare 2yo Group double at Royal Ascot earlier this year –his son, Caravaggio winning the Gr2 Coventry Stakes and daughter, Lady Aurelia taking the Gr2 Queen Mary Stakes.

Storm Cat’s influence on the breed, however, is not restricted to his sons and grandsons.

The son of Storm Bird (himself an outstanding broodmare sire) is an increasingly dominant broodmare sire. Storm Cat, who currently ranks second on this year’s Leading Broodmare Sires list in North America, is damsire of more than 220 stakes winners to date, with his 2016 stakes winners including Gr1 Dubai Turf hero, Real Steel.

The latter is a son of Japanese sire, Deep Impact (Sunday Silence), who has fared extremely well when mated to daughters of Storm Cat. A dual US champion sire and multiple champion sire of 2yos, Storm Cat has been a magnificent broodmare sire with his daughters having produced such champions as Close Hatches (First Defence) Folklore (Tiznow), Mujahid (Danzig), Shared Belief (Candy Ride) and Speightstown (Gone West) as well as numerous other Gr1 winners.

His daughters have done particularly well with Candy Ride and Mineshaft, as well as with Unbridled line sires and A P Indy line descendants.

Storm Cat daughters are also set to make their mark in South Africa.

Not only is the former US champion the damsire of the very exciting young Rathmor Stud sire, Noble Tune (Unbridled’s Song), but Storm Cat also features as the broodmare sire of two young sires set to stand their first season in South Africa this season –Ascot Stud’s Global View (Galileo) and Klawervlei’s Coup De Grace (Tapit). He is also damsire of Highlands Farm’s veteran sire, Windrush, whose 2yos have enjoyed such a great year this season. Windrush has had just six 2yo runners this year, but they include Gr3 Kenilworth Fillies Nursery winner, Nordic Breeze and KZN Yearling Sale Million heroine, Lunar Rush. A champion sprinter, out of a champion daughter of Storm Cat, Speightstown is currently one of North America’s leading sires, having over 70 stakes winners to his credit.

Currently standing for $100 000 (he is one of just 11 sires currently active in North America with a fee of $100 000 plus), Speightstown has 13 individual Gr1 winners to his credit, and is clearly among the very best sire sons of the great Gone West.

The chestnut also rates as an exciting young sire of sires – with his sons, Munnings (I’m A Chatterbox) and Lord Shanakill (My Dream Boat) already having sired Grade/Group 1 winners.

Another successful sire to have been produced from a Storm Cat mare is Three Chimneys’ resident sire, Sky Mesa (Pulpit). 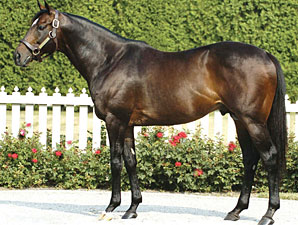 An unbeaten Grade One winner at two, Sky Mesa sports a pedigree out of the very top drawer. Not only is his G3 winning dam an own sister to Storm Cat’s top class sire son, Bernstein (his offspring include two Breeders’ Cup winners, including Tepin), but Sky Mesa’s fifth dam is Gr1 Suburban Handicap winner, Busanda, the dam of Horse Of The Year and top class sire and legendary broodmare sire, Buckpasser. To date, Sky Mesa (whose offspring have earned over $40 000 000) has been represented by over 50 stakes winners, headed by Gr1 winners, General Quarters and Sky Diva, as well as Canadian champion, Dynamic Sky.

Himself a Gr1 2yo (the only season he raced), Jump Start has over 40 stakes winners to his credit- including Gr1 Hollywood Gold Cup hero Rail Trip.

The Storm Cat maternal impact can also be seen in the current Leading First Crop Sires List in North America. He is broodmare sire of Bodemeister (Empire Maker) and Dialed In (Mineshaft) – a pair of Grade One winners who currently rank third and fifth respectively on this log.

Clearly, the influence of Storm Cat is a huge one – and it looks sure to grow still further (both here and abroad) in the coming years.