The sun has long set on the SA Champions Season and beyond the glitz and glamour of the various awards ceremonies, the horseracing community at large has gone into hibernation.

Holidays and housekeeping are the current priorities. And with no feature scheduled on the national programme this weekend, we focus our sights on a quality 1800m Pinnacle Stakes on the ever-reliable Fairview turf today.

The cynics may label it scraping the barrel. We’d rather call it passion.

When you’re a die-hard daily grind player, the priority is in the wager and the chances of a win, rather than the race status or the stake cheque.

Because that’s really what keeps the juices flowing for the staunch through the bread and butter menu!

After a nice double at Kenilworth on Saturday, Justin Snaith will be keen to get his 2016/17 East Cape campaign going and with a class Jet Master trio at his disposal in the R94 000 Pinnacle Stakes, he will feel he can bank the lion’s share. Topweight Jet Explorer has shown a love of Fairview and has won 3 of his last 5 starts here.

Now an 8yo, the son of Jet Master has been well documented as the ‘miracle horse’ –  a survivor of an horrific accident in the 2014 Gr1 Gold Challenge.

He has come back fighting and as a former Gr2 Betting World 1900 winner, his credentials are without question.

Richard Fourie rides him from a decent draw and he must be a natural first choice to win.

His year younger stablemate True Master actually dethroned Jet Explorer at his penultimate start over a mile, but is 1,5kgs worse off here and may struggle to repeat the feat. Greg Cheyne rides him at his first Fairview meeting in over eight months, following an injury.

Masterly is the third of the Snaith attack and looks held by Jet Explorer on his last two starts.

The 6yo may also prefer the poly to what he gets on Friday. 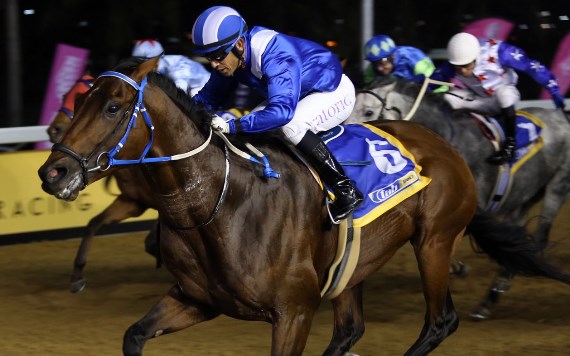 A former Listed Michaelmas Handicap winner, the son of Dynasty ran a cracking third behind the seasoned Punta Arenas in the Consolation July.

While strictly under the cosh at the weights, a repeat of that effort could see Alghadeer challenging if he is fit and race ready at his first Fairview start after a 6 week break.

Dorrie Sham has a trio of runners and it is safe to assume that based on the riding arrangements, King Of Chaos is the elect.

The son of A P Arrow looked to be a decent 2yo but failed to fire with any serious zest during his 3yo term where he failed to win again.

He caught the eye when staying on nicely for third in the East Cape Derby and his last start was his best in ages , when he chased Jet Explorer home – failing by a quarter length.

King Of Chaos is a half kilo better off here on the turf and could be the dark horse to challenge if he maintains the improvement.

Master James has had just the one run in PE since relocating from Dean Kannemeyer at Summerveld.

The son of Jet Master looked quite promising at one stage but has not really gone on as anticipated and desperately needs a win to regain his confidence.

The third of the Sham team is the under sufferance Baahir who also has his second run here. The son of Galileo will need more ground to be effective and looks to be going through a fitness building programme.

Gavin Smith’s 7yo Global Express has not been at his best lately and is well held by Jet Explorer on his last run.

The son of Jet Master should battle on these weight terms. Jannie and Renate Du Plessis – saddle a pair of runners

The stable of Renate du Plessis has been in good form of late and they saddle a coupling of Rahvar and Oh So Modus.

A former Glen Puller charge, Rahvar looks to be very happy in his new PE home, winning at two of his last four starts and earning every time.

The son of Var came on strongly to get within 0,30 lengths of Jet Explorer on the poly last time and is 2kgs worse off with the topweight here.

But the surface switch may nullify that and Rahvar looks to have more scope as the younger horse.

Stablemate Oh So Modus would have preferred another 400m and looks to be held again by Jet Explorer on his penultimate run on the poly. It seems the Snaith horse will be stronger on the turf.

The 7yo Australian-bred Killua Castle is top-class on his day and has not been in the winner’s enclosure since beating newly crowned Horse Of The Year Legal Eagle in an Allowance Plate nine months ago.

The multiple Gr3 winning son of Churchill Downs relocates from the Geoff Woodruff yard to Duncan McKenzie for his first outing in the Windy City. Killua Castle is capable on his day

He comes out of an unimpressive effort in the Consolation July and while the form suggests otherwise, the engagement of Andrew Fortune could prove an inspirational move.

There must be an element of trepidation banking on an 8yo, but Jet Explorer ticks the boxes and he looks the right one.

Alghadeer and True Master look next best, with Killua Castle the shrewdie’s quartet kicker if he decides to pick up his hooves and demonstrate some of his early better group race ability.