It was joy for the Rest of the World in the 2016 Shergar Cup at Ascot after a thrilling finish to the competition which went right down to the wire.

Thierry Jarnet and Team Europe got off to the perfect start winning on board In Salutem, who was heavily backed just before the race and a good ride by fellow Frenchman on Out Do meant it was a first and third double for Team Europe in the card opener. 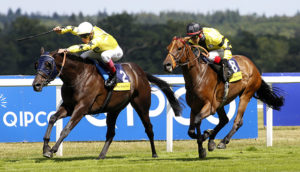 However the Rest of the World came back fighting in the second race of the day, the Stayers over two miles. South African jockey Gavin Lerena lead from front to finish with Arch Villain, alongside Sea of Heaven and Japanese jockey Kenichi Ikezoe who grabbed back-to-back second places in his opening two rides ever at Ascot.

Great Britain and Ireland got their first winner on the board in the third race after Martin Harley’s superb front-running ride saw Mistiroc land the spoils over one mile four furlongs.

At this stage, the Rest of the World lead by just six points from Team Europe but all four teams were still in with a shout.

It was an emotional fourth race as Hayley Turner won on her return to Ascot. The returning female jockey stormed from the front to win on Early Morning and get the Girls right back in the Shergar Cup.

South African Gavin Lerena sealed his double with another impressive ride on 10-1 shot Daneshill Kodiac to seal the fifth race, putting him in the driving seat for the Silver Saddle.

Lerena was followed home by Combative and Silvestre De Sousa making it a one-two for the Rest of the World and making them difficult to beat in the overall Shergar Cup.

Heading into the final race of the day, the Dubai Duty Free Shergar Cup Sprint, the Rest of the World team were leading on 63 points, 13 ahead of their nearest rivals Great Britain and Ireland. Europe were languishing on 40 points at the foot of the table, but a one-two in the last, courtesy of the Thierry Jarnet ridden Kadrizzi and Flying Pursuit, the mount of Pierre-Charles Boudot, saw them end the day on 65 points.

Jarnet’s win aboard Kadrizzi was his second for the day and gave the Frenchman a 37.5/1 on the card. It also meant that he finished the day at the top of the Alistair Haggis Silver Saddle standings on 38 points, eight ahead of Lerena. “I am very happy with today,” said Jarnet. “I am delighted to finally ride a winner at Ascot – it’s a beautiful racecourse. The ground was perfect and it’s fantastic to win the Silver Saddle. It’s very nice to come to England and ride at these meetings. The competition is fantastic here and I’ve really enjoyed it. I’m delighted to have been the top jockey and it’s always nice to win any award.”

However, a fourth placed finish by Kenichi Ikezoe on Suqoor earned the Rest of the World team a valuable five points, which was enough to secure victory and Gavin Larena, Kenichi Ikozoe and Silvestre De Souza lofted the trophy.

Captain Silvestre de Sousa was delighted with the performance of his team, which won with 68 points, and had particular praise for South African-rider Gavin Lerena, who rode a 285/1 double on the card. “It was good,” said de Sousa. “I’ve really enjoyed the day. It’s something a bit different and was a big team effort. We had some great riders on our team and it’s great to win. I’d met Gavin before today, but I hadn’t met Kenichi before. Gavin is a brilliant rider and he has showed that this afternoon with two good winners. I’d definitely like to ride in the Shergar Cup again – it’s good fun.”

Ikezoe was delighted that his ride gained the 2016 Dubai Duty Free Shergar Cup for the Rest of the World team. He said: “It is great that my ride in the last has clinched the Shergar Cup.”

Gavin Lerena, the most successful member of the Rest of the World team with two winners, declared: “My saddle slipped on my mount in the last but luckily it has not made any difference to the end result.  “I am very, very pleased with the day – we won and I had two winners. Thanks go to Dubai Duty Free for sponsoring the event and to the two others on my team.”

4 comments on “Laurels for Lerena”