Despite having been around racing all of his life, could we really blame newly licenced trainer Gareth van Zyl for believing that this is an easy game?

The 30 year old son of former top jockey Gavin van Zyl made an extraordinary start to his solo career when saddling two winners -including the feature – from his first two runners at a wet Greyville on Friday evening. The PinkDrive charity fundraising theme for the evening considerably brightened what looked like better weather for duck racing – with Gold Circle breathing a sigh of thanks for their all-weather track, which saved what could have been a second threatened meet in a matter of six days.

But the sponsors came to the party for the excellent cause and matters evened out well, with the jocks – clad in eyecatching pink breeches – working hard to see the eight races out.

The R150 000 Listed Michaelmas Handicap was the evening’s topliner, with a field of twelve runners lining up, as the 2015 Algoa Cup winner Stonehenge started a weak favourite.

After Gareth van Zyl had opened his professional account in a modest Qualified Maiden Plate an hour and a half earlier with the consistent Northern Storm, the yard had their tails up to make it a 100% strike on the evening with Celtic Captain completing the double. Magic moment! Gareth and his wife Kirsten lead in the winner with an elated Warren Kennedy in the saddle

Things panned out according to plan with the 4yo gelding showing that his run in the Grand Heritage at the Vaal a month earlier under a trainstopping 61,5kgs was not his form.

Warren Kennedy always had him within striking distance here as Serissa showed the way from Mamasita and Stonehenge.

Celtic Captain came through down the inside and building up steadily, ran all the way to the line under a determined ride to hold off the challenge of Ashton Park by a half length in a time of 115,09 secs. 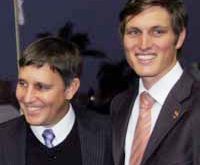 Princess Varunya came out of the pack at any price to nab third from under the nose of French Revolution, whose rider appeared to lose his crop in the final stages.

This was a first stakes success for Celtic Captain who had previously only ever won up to a mile.

Owner Brian Burnard went to R300 000 at the 2014 Emperors Palace National 2yo Sale for the Patricia Devine Investments-bred son of Captain Al.

The winner is out of the twice-winning Royal Chalice mare, Celtic Chalice, who won her races from 2000m to 2400m.