South Africa’s highest rated sprinter Talktothestars heads a quality field that is set to do battle down the Kenilworth 1200m straight in Saturday’s renewal of the R400 000 Gr2 Diadem Stakes. Talktothestars – looks ready to run a big one

The race, formerly run in late December, boasts a proud history and looks set to provide another fascinating spectacle. It is run at weight-for-age, with penalties of 2kgs for a Gr1 win and 1kg for a Gr2 success.

Charismatic Vaal trainer Coenie de Beer, a man reputed to braai the best ribs in town and who doesn’t believe in the hype around alumites and shoes in general, makes the long trip from home base with the Overlord gelding Talktothestars, who tops the SP race ratings.

The 5yo equine Zola Budd is now a ten-time winner and achieved a peak career success – without shoes naturally – last term in the Gr1 Tsogo Sun Sprint. He subsequently ran fifth in the Mercury Sprint behind Red Ray, appearing not to quite enjoy the Greyville turn. 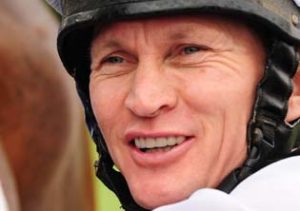 The barefoot bomber’s new season campaign started in an unconventional manner – a trip to the Kimberley dust bowl where he duly won.

His last run produced something like his better form, when he came on late for a 2,40 length third behind Trip To Heaven in the Joburg Merchants.

He knows the Kenilworth strip and runs for Piere Strydom – and meets the revitalised Trip To Heaven on 1,5kgs better terms here.

The Tarry gelding has won 6 of 16 and has his first start in the fairest Cape. His trainer certainly knows his way around these parts!

Joey Ramsden’s Mercury Sprint winner Red Ray returns from a 26 week break but may well be fitter than he looks on paper, thanks to the famous Goodhope Racing treadmill. Red Ray – long layoff and may need it

He is technically held by Talktothestars on his Tsogo Sun run, but there were excuses – a lost shoe being one of them. At varying levels of well-being, he actually beat Trip To Heaven 5,5 lengths at level weights with a storming win in the Mercury.

Listed Southeaster Sprint winner Tevez is an enthusiastic 7yo.

He ran 8th behind stablemate Lanner Falcon in this race in 2015, and has won 2 of his last 5 starts – never further off than 3,10 lengths in the process.

Gulf Storm ran third behind Lanner Falcon in the previous renewal of this race, and ran disappointingly in the Southeaster Sprint when 3,40 lengths behind Tevez. He is a half kilo better off with the Bass speedster, but will need to improve to feature.

Snaith runner Captain Alfredo showed the benefit of a wait-and-see Piere Strydom ride, when dashing through late for third in the Merchants behind Search Party. While he gets the red hot Richard Fourie in the saddle and is as much as 6kgs better off with Search Party, he seems best over the minimum trip and looks unlikely to repeat against class here.

Victorious Jay has not won in over a year and looks unlikely to spark here. That said, he has run some decent races in strong company and is 3kgs better off with Search Part for a 2,60 length Merchants fourth last time.

Line Break has been struggling to regain his better earlier form and is well held by stablemate Tevez.

Exelero is the second of the Marshall runners. He failed to show in the Merchants and looks outpointed on these conditions.

The Merchants winner Search Party showed  cracking resolve over Saturday’s course-and-distance with his end-to-end Gr2 win but faces a very different hurdle at these weight conditions.

The son of Captain Al has won 3 of his last 4 starts and could raise his game again. Brilliant Crimson looks to have a big task

Listed East Cape Guineas winner Brilliant Crimson has nothing on his formline to suggest that sprinting is his forte. He looks to have a tough task off his 92 rating.

The Var gelding Purple Mountains returns home after a KZN campaign that rendered just one polytrack win. He looks likely to need the outing after an 11 week break.

Andre Nel’s La Favourari ran a decent fourth in the Listed Southeaster Sprint, but is as much as 7,5kgs worse off with Tevez for a 1,55 length deficit and that won’t be an easy reversal to pull off.

The weight-for-age terms of this race favour the top-rated trio of Talktothestars, Red Ray and Trip To Heaven.

With fitness, in Red Ray’s case, the unknown, and form reversals along the way, it is a race that looks set to produce a titanic battle and a nail-biting finish.

We are going with Talktothestars to register his first Cape success, at the expense of the revitalised Trip To Heaven, with the high quality stallion prospect Red Ray thereabouts.