A granddaughter of champion racemare Ilha Da Vitoria stamped herself as a filly with a bright future when disposing of nine male opponents to score a facile win in the R150 000 Listed Sea Cottage Stakes at Turffontein on Saturday. The Turffontein judges didn’t distinguish themselves with confusion reigning over the third and fourth places in the race.

But there was no doubt over the winner – the beautifully bred Mike de Kock trained Orchid Island cruising in to beat the boys with consummate ease.

She is out of Ilha Grande, whose illustrious Mum Ilha Da Vitoria set the turf alight during her days on the track when racing out of the same yard.

Her grandmother, a Brazillian bred daughter of Candy Stripes,  was  South Africa’s Horse Of The Year in 2006 – the same year she was also named Equus Champion Older Female Middle Distance Horse.

Ilha Da Vitoria’s ten wins, from 1400-2000m,  included seven features –and few who witnessed it will ever forget the brilliant grey romping to a five length win in the 2005 Gr1 Summer Cup. 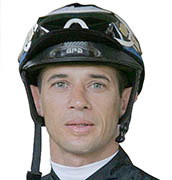 While the diminutive and charismatic grey sadly passed on at the end of 2016, her contribution to the SA stud book will gallop on thanks to the likes of the promising Orchid Island.

After shadowing her field wide out for much of the 1800m trip, Orchid Island moved up behind her highly regarded stablemate Al Fahad at the 400m, and drew off with ease to win by 4 lengths under the hands, in a time of 112, 79 secs.

She started at 33-10 and gave  Mauritzfontein-Wilgerbosdrift sponsored Anthony Delpech a welcome first feature success in only his second meeting on his return from injury.