The combination of Alan Greeff and jockey Andrew Fortune maintained their superb winning run with a hat-trick at Fairview on Friday. Most  impressive of their trio was the Gimmethegreenlight filly Beataboutthebush, who cruised in to win the R150 000 Listed Breeders Guineas. Gimmethegreenlight (More Than Ready – Yes She Can Cancan)

Young stallion Gimmethegreenlight has hit a purple patch and the smart filly’s first black-type success came just a week after her sire stamped his authority on Fairview’s Listed Ibhayi Stakes, by siring both the winner Gimme The Stars and third-placed Green Lantern.

Greeff held a tactical upper-hand in the mile turf contest with three runners, and it was not surprising – in view of the favourite’s stamina doubts – to see Seattle Burning out front and ensuring a true-run afffair.

In a matter of strides, Beataboutthebush allayed any fears about whether she’d get the trip, when she rocketed into the lead. 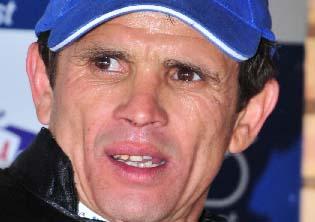 Andrew Fortune – armchair ride and a good day at the office

Fortune eased Beataboutthebush up before the line and she won tightly held by a half length in a time of 95,93 secs.

She beat the very consistent Star Burst Galaxy with ease, with Yvette Bremner (two winners on the day) maintaining her good form with an excellent effort by the seemingly outgunned Fantasy Quest in third.

The Cape based stakes winner The Merry Widow was favourite, but came under early pressure and did not appear to stay the mile. She plodded into fourth.

The Varsfontein-bred winner boasts a near-perfect formline of four wins and a second from as many starts.

Raced by the Greeffs and the Scribantes, she is well on her way to recouping the R300 000 that Lee Scibante laid out for her at the 2015 BSA National 2yo Sale. The winner as a youngster

A half-sister to Gr3 East Cape Derby winner True Master (Jet Master), she is the second stakes winner produced by talented Bushra (Badger Land), a dual Gr3 winner herself and dam of five winners from as many runners.

Former G1 L’Ormarins Queen’s Plate winner Gimmethegreenlight has seven lots on offer at next week’s Cape Yearling Sale, with his draft including a filly out of a ½ sister to champion Laverna (Lot 33), a filly from the great Queen Of Light family (Lot 50), a colt out of G2 winner Cruise Collection (Lot 113) and a colt out of a stakes placed daughter of Royal Academy (Lot 141).

He also has seven yearlings at the 2017 March Yearling Sale-including a filly from the family of Zilzal, Intikhab and Polish Precedent (Lot 43), a colt out of a winning Exceed And Excel half-sister to a group winning 2yo (Lot 109), a colt out of a ¾ sister to champion and sire Bold Silvano (Lot 113) and a colt whose dam won three times up to 1200m (Lot 130).