Yvette Bremner and apprentice Lyle Hewitson enjoyed a red letter day at Fairview on Friday, teaming up with four winners – including the R150 000 Listed Ibhayi Stakes with the smart 3yo, Gimme The Stars. But extraordinarily, Ms Bremner was not the major winning trainer on the day – that honour fell to local champion Alan Greeff who trained the balance of the card – five winners in all, with Andrew Fortune riding three and Charles Ndlovu two, in the absence of the injured Greg Cheyne.

The young Avontuur-sponsored Hewitson is blazing his way towards his first SA champion apprentice title and his partnership with Bremner – for whom his for former jockey Dad, Carl, works as an assistant – has been a fruitful one.

The combination struck early in the day – reeling off a genuine hat trick in the opening three races, including the obviously talented Sail From Seattle 2yo Via Seattle, who maintained her unbeaten record, registering her second win in the first. She is one of 9 individual juvenile winners for the deceased Ascot Stud stallion.

But the yard’s major success of the afternoon was Bryn Ressell, Hedley McGrath and Mark Wright’s talented Gimme The Stars, who scored a convincing win in the feature, to prove he could develop into something decent on the green – his 3 previous wins all achieved on the poly.

Lyle Hewitson had Gimme The Stars relaxed four lengths back on the rail as Cape raider Cock-A-Hoop led Story Of My Life for home. 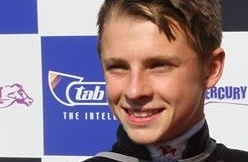 At the 350m marker, Story Of My Life passed Cock –A-Hoop, with Gimme The Stars being switched out for a run.

With the top two looking set to hammer things out, Hewitson switched whip hands and Gimme The Stars responded sweetly – changing legs and taking off late.

The flashy gelding gathered himself beautifully and ran on powerfully to beat Cock-A-Hoop by 0,25 lengths in a time of 85,26 secs.

Green Lantern stayed on for third, marginally ahead of the game Story Of My Life, who faded very late.

The Alan Greeff yard were in fine form, with their five winners. with the good son of Bankable, Thayer, finding his feet in the MR 100 Handicap, to beat a good field of speedsters.