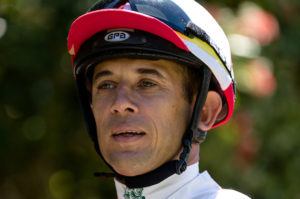 Anthony Delpech has been invited to ride as part of the Rest Of The World Team for the 2017 Dubai Duty Free Shergar Cup, to be held at Ascot Racecourse on Saturday, 12 August 2017.

Frankie Dettori, Jamie Spencer, Kerrin McEvoy and Emma-Jayne Wilson have been confirmed as team captains for the 2017 renewal of the event and teams are as follows:-

The Challenge is held over six races, all of which are handicaps worth £45,000 bringing the total prize money to £270,000. Each participant will get five rides as they bid to win the Dubai Duty Free Shergar Cup for their team.

There is a £3,000 prize as well as the Alistair Haggis Silver Saddle Trophy on offer to the highest points-scoring jockey of the day. Points are awarded 15, 10, 7, 5, 3 for the first five horses home with 4 points for a non-runner.

Emma-Jayne Wilson, who captained the Girls team to victory in 2015, is back and will be joined by Michelle Payne from Australia, and 2016 Champion Apprentice Josephine Gordon.  Payne made history in 2015 when becoming the first female to win the Melbourne Cup, on the 100-1 shot Prince of Penzance, while Gordon became the third female to be crowned British flat racing Champion Apprentice in 2016 after Hayley Turner and Amy Ryan.  Wilson is Canada’s most successful female jockey having ridden over 1,000 winners. This will be her sixth Shergar Cup appearance.

She said, “I am so proud to have been part of the first Girls team to win in 2015 and I am looking forward to being back at Ascot this year. The Dubai Duty Free Shergar Cup provides a great opportunity for us girls to prove we are as good as some of the world’s best male jockeys and I can’t wait to team up with Michelle and Josephine.”  Michelle Payne commented, “I am so excited about riding in the Dubai Duty Free Shergar Cup, especially after the disappointment of not being able to last year due to my injury. We have a great team and I’m really hopeful that we can do the fans proud and take back the cup!”

Frankie Dettori is a Shergar Cup veteran having taken part eight times. He said:  “I always look forward to the Dubai Duty Free Shergar Cup as it is a great day with a fantastic atmosphere. We were so close last year, hopefully we can win this time.”  He will be partnered by Shergar Cup debutant Alexander Pietsch from Germany and Adrie De Vries. Pietsch was Champion Jockey in 2015 and runner up in 2016. It will be his first Shergar Cup but second time riding at Ascot having ridden in the Queen Alexandra Stakes at Royal Ascot in 2016. De Vries won the 2016 Qatar Derby on Noor al Hawa and earlier this year won the Dubai City of Gold on Prize Money.

Rest Of The World

2016 Melbourne Cup winner Kerrin McEvoy captains the Rest Of The World team.  He commented, “I am very honoured to captain the Rest Of The World team and am really looking forward to my second Dubai Duty Free Shergar Cup.  It’s a unique competition that brings something different to racing.”  Joining him will be two more new recruits to the Shergar Cup – South African Anthony Delpech, and the 2016 Victoria Mile (Straight Girl) winner, Keita Tosaki. Tosaki also won the 4th leg of the Longines International Jockeys Championship at Happy Valley last year upon Big Bang Bong. This will be his first time riding in Britain.  Tosaki said: “It has always been my dream to ride in England and to do it for the first time at the Dubai Duty Free Shergar Cup is something I am really looking forward to. It is a great opportunity to ride against some of the most successful jockeys in the world.”

In the 2016 renewal, Gavin Lerena rode for the Rest Of The World team, helping secure the trophy by riding two winners.

Jamie Spencer will captain the Great Britain and Ireland team where he will be joined by the four-time British Champion, Ryan Moore, and Ireland’s Neil Callan.  “I really enjoy the Dubai Duty Free Shergar Cup, it is fun to ride as part of a team and the atmosphere at Ascot on the day is great,” Spencer commented. “The crowd really get behind their favourite team and I am excited to be captaining the Great Britain and Ireland team this year.”

Dubai Duty Free has been associated with the Shergar Cup since its inception and Colm McLoughlin, Executive Vice Chairman & CEO of Dubai Duty Free, said, “We are very much looking forward to this year’s Dubai Duty Free Shergar Cup, the 17th renewal that we have supported at Ascot.  The line-up of jockeys for this year’s event demonstrates that the competition continues to command the attention of top riders from all over the world and places in any one of the four teams are highly sought after.”

Nick Smith, Director of Racing & Communications at Ascot Racecourse, added “The jockeys riding in this year’s Dubai Duty Free Shergar Cup are among the best ambassadors the sport has to offer. Amongst them is the international phenomenon which is Canada’s Emma-Jane Wilson, the perennial champion at Woodbine and Michelle Payne, who made history in 2015 when she won the Melbourne Cup. We all wait with excitement to see which team will come out on top and whether the Rest of the World can retain their crown.”

Where Have All The Cowboys Gone?