The recent Gr3 Pretty Polly Stakes winner Green Plains showed she is a filly with a bright future when she skipped clear late in the R400 000 Gr2 SA Fillies Nursery to give trainer Sean Tarry his opening feature success of Champions Day, 2017. 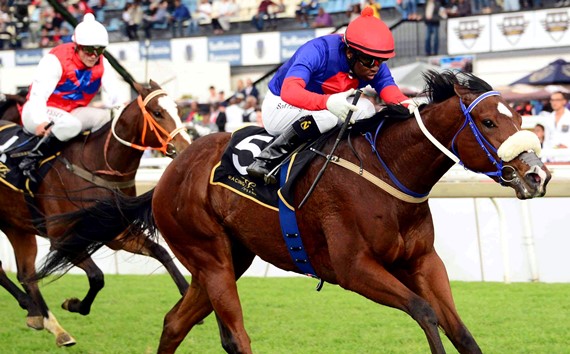 In what was to prove another big feature weekend for Varsfontein stallion Gimmethgreenlight, the Gary Player Stud bred filly showed good ability when accounting for her opposition over the 1160m – a distance possibly on the short side for her looking ahead.

Daring Diva and the very fast Kissable led the way early, with Bling Khumalo stalking them from a length off in third.

Into the final 300m Green Plains asserted her authority and went on to score a smart win by a length in a time of 66,33 secs at the expense of Stan Ferreira’s recent debut winner Winter’s Forge who ran a cracker down the inside all on her own.

Daring Diva saw her unbeaten record up in flames but stayed on gamely for third, ahead of the winner’s stablemate Desert Rhythm who made up good ground late for fourth.

Kissable showed lots of toe but fell in a hole to run an unpaid 5,25 lengths off.

Winning rider S’manga Khumalo said that his instructions were to ride Green Plains as he found her.

“She was idling behind them. When I asked her she really picked it up. This was a win full of merit,” he said.

Trainer Sean Tarry said that it had been ‘a tough month’ but was hoping that everything was in place fro Champions Day.

“I’d like to aim a filly of this quality at the Gr1 Allan Robertson at Scottsville,” he said, confirming the upward graph shown by Green Plains.

Bred by Gary Player Stud, she is a daughter of exciting young sire Gimmethegreenlight out of the one-time winning Jet Master mare, Savannah Leigh.

When suggested by Tellytrack presenter Deez Dayanand that the Tarry-Khumalo-Van Niekerk partnership was a ‘match made in heaven’, owner Chris van Niekerk suggested that he wouldn’t go that far – ‘but let’s just say we are getting there’, he added.

Are You Feeling It Yet?

A Chill In The Air