South African racing fans will be glued to their Tellytrack screens this afternoon with two of our own running in the Gr2 Duke Of Cambridge Stakes on Royal Ascot Day 2. Smart Call is in the betting – can she make history for Sir Michael Stoute? 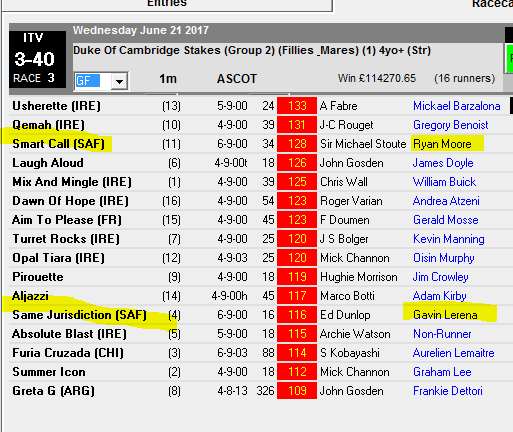 Gavin Lerena, who returns to ride Brazuca in the Vodacom Durban July next Saturday, partners the Ed Dunlop-trained former Ashburton resident, Same Jurisdiction. A 50-1 shot, she will be nearing peak fitness and could be a quartet inclusion with a bit of luck.

To be ridden by Ryan Moore, Smart Call is in single figures and the word is that owner Jessica Slack will be on track to cheer her home.

Smart Call is trained by Sir Michael Stoute, who is bidding to make history by saddling a record 76th winner at Royal Ascot. Stoute, a ten-time British Champion will overtake the late legend, Sir Henry Cecil, as the winningmost Royal Ascot conditioner of all time should he win one race today. He also saddles the favourite Ulysses in the Gr1 Prince Of Wales’s Stakes.

In a race suggested to be a punting minefield, a tipster has said that Laugh Aloud looked a filly to follow in a higher grade when a very impressive winner at Epsom last time but unfortunately the layers agree, and she trades at around 11/4 to beat a dual Gr1 winner in Qemah, as well as fillies of the calibre of last year’s winner Usherette and our big hope Smart Call.

1 comment on “Big Day For SA At Royal Ascot”