A little piece of history – Three generations of Ferraris at Scottsville on Sunday (photo: Candiese Marnewick)

Luke Ferraris had his first two rides under rules on Sunday, 3 December 2017 and with his parents, David and Pam travelling from Hong Kong and grandfather, Ormond Ferraris making the trip from Johannesburg, the day turned into a landmark event with three generations of Ferraris in the Scottsville parade ring on Sunday.

I caught up with David on his flying visit.

First things first, why training? “With my father being a trainer, I suppose it was a natural progression. My two brothers are intellectual – Paul’s an attorney and the other one’s in Florida, but I always wanted to be with horses, it’s all I wanted to do. When I finished school, I was conscripted into the army. I was in the air force in Pretoria, which made it very easy for me to become involved in racing while doing my national service. But before that, Mike de Kock and I were in the same class together in Alberton High. Mike was very keen on becoming a trainer. I brought him round to my dad and said we’ve got to have him come and help us. Mike began working for us and then he was with Ginsberg and when Ginsberg passed away, he inherited a big yard.”

David went out on his own in 1995. “When Dad retired, I went to Cape Town and did OK. Then I came back to Joburg and things just took off. My dad left me some very nice horses which I managed to take and win some big races.” Enough, as it happens, to be named Champion Trainer four times, with some his biggest highlights including horses such as Classic Flag, Super Quality and Celtic Grove.

“Super Quality was 15’3 and the most magnificent little horse. Lionel Cohen bred him and I think Dad bought him and I got him when my dad retired. He won three Derbies in one year – the Computaform, the SA Derby and the Cape Derby.  Winning the July with Muis is one of those moments I’ll never forget. It was so emotional, especially for Muis winning after trying for so long.” 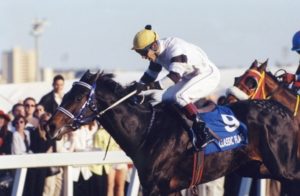 “Classic Flag was also incredible. He belonged to Prof Herbst. In those days they had Transvaal breeders premiums. Prof Herbst had R20k of premiums which he exchanged for Classic Flag, so he got him for free.  He was also a small little guy – marginally bigger than Super Quality, by about an inch! Both of my best horses have been smaller ones, besides Vengeance Of Rain, who was a huge big horse. I went to visit Classic Flag not so long ago. He’s retired now, but still doing well.” 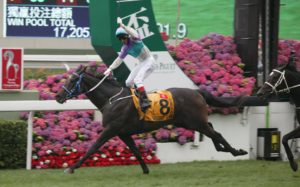 David relocated to Hong Kong in the 2003/04 season and has been there 14 years now. “It was a good move. It was tough in the beginning, very tough, but I was fortunate to get Vengeance Of Rain in my second year.”

“He came to me as a young horse and he’d already won a feature in Australia. The owners bought him from Crown Casino mogul Lloyd Williams, who was apparently very upset when the horse ended up doing so well,” he remembers. “He didn’t show much early on, and then I think I ran him with Anthony Delpech in a mile with bottom weight and he just romped home. Then I realised this is a good horse and I don’t think he was beaten for the next 5 runs. He went from handicap to group class, won a Gr3 and then stepped up to the Derby.”

“He had a heart condition, so one doesn’t know how good he actually was. His heart used to fibrillate. It was a dreadful thing. You’d have to leave him alone and his heart would come right. When he’d won all those big races, he had a bad fibrillation. I sent him back to Cambridge Stud where he was born to have a rest. I think I was the first person to do that – send a horse out of Hong Kong and bring it back. But it was what he desperately needed. Sir Patrick Hogan sent photos of him romping in the paddocks. When he got back, he won the Dubai Sheema Classic, which was probably my greatest moment.”

“But you never knew if his heart was going to be OK. I learnt to listen and by putting my hand by his girth, I would feel immediately if his heart was in a rhythm. I became an expert on hearts and potassium level excretions. Fortunately he only did it in work. It happened once in a race, and that was his last race and then he retired. He went back to Cambridge and one morning Sir Patrick phone to say the big horse had passed away. There weren’t any signs of distress, it seems he just lay down and died, which just shows you had head a weak heart. If things had been different, who knows what he could have done,” he reflects.

Hong Kong built a brand new set of stables for the equestrian events for the 2008 Olympic games at Sha Tin. “Once the Olympics were over, they said four trainers can go and I put my hand up immediately.”

Unfortunately it wasn’t smooth sailing. “After doing very well, things started to go pear-shaped. The biggest problem was that there was no pool. Anywhere else in the world, you can train in the open and take horses for walks. In Hong Kong, horses get trained and put on the walker. They need something to take their minds off the boredom and they absolutely love to swim.”

Aside from the pool, there were additional logistical challenges such as needing extra grooms and work riders to get the horses to track and back. “It took a long time to convince them that I couldn’t do the job being so far from the main training centre and that I needed help. Eventually they gave me some extra grooms and work riders and things got better, but we still didn’t have the pool.” Fortunately Hong Kong has just invested in a multi-million dollar swimming pool and David has seen immediate benefits. “My 16 wins jumped to 33. I’m currently on 9 wins and we’re only a few months into the season. It’s been a huge asset.”

With Hong Kong being the envy of most of the rest of the racing world, David agrees that it’s world class. “It gets tremendous publicity in English and Chinese newspapers. Our courses are always packed to capacity and turnover reaches billions every meeting and it all goes back to charity at the end of the day, so it’s quite a unique organisation. They do tremendous service and wherever you go – clinics, schools, universities – you see ‘sponsored by the HKJC’. Our CEO Winfried Engelbrecht-Bresges has turned the club around. He’s realised that we need South African horses here. Once they get here, they do well and they’re very good value for money.”

What does he make of the prospect of Conghua? “I think what it will do is give trainers 10 extra spaces on the Sha Tin side. It’s a beautiful set-up. It’s based on Sha Tin, but improved tenfold. It will be interesting, but we’ll have to watch and see.”

One can’t avoid the obvious conversation about export and the potential opportunities for South Africa. David confirms that matters are at an advanced stage and is confident that we’ll see direct exports as early as next December. “Once that’s done, owners will realise the value they can get in South Africa and it will have a knock on effect to Australia, New Zealand and even England. SA riders also have a good record in Hong Kong and David famously gave Karis Teetan his first Hong Kong win. “He’s fantastic. You might moan at him when he’s ridden what you perceive to be a bad race and the next morning, he’s there, smiling. South African riders have a great work ethic and no matter what, they’re there in the morning to gallop the horses.”

And now his son Luke is learning the ropes and put in a commendable first outing to finish in the money on his first day at the office. “We were a bit apprehensive at first, but he kept nagging and eventually I said to Pam, we have to make a decision, so we rang the Academy. He was over the moon.”

“He’s finished Std 8, so he’s got 9 and 10 left and will finish matric there. In the old days, kids used to leave school in Std 6 and 7 and if they got too heavy to ride, it was difficult for them to do anything else. But it’s such a good institution and Graham Bailey runs it so well, that the academic side is as important as the riding side.”

“Ever since he was a little boy, he was fearless on a horse. I remember him galloping up the beach at Zimbali. I think he must have been 3 or 4 years old and he was going flat out, waving his arms at us,” he chuckles proudly. “He just always wanted to be a jockey. It got so bad, he used to put a saddle on our leather couch.”

David is understandably proud that Luke has made it to his first ride so quickly. “He arrived in January and he’s riding in December – it’s unheard of, really. The instructors said it was obvious he’d had a good background and that’s helped a lot. I think he’d only been there two weeks and once he finished in the arena, he was riding work. He’s very well mannered, which he got from St Andrews and boarding school, so all the trainers seem to like him.”

In addition to having his parents and grandfather on course, Luke’s godfather, Paul (David’s brother) also flew down for the occasion and Luke did not disappoint. From two carded rides, he finished in the money on Louis Goosen’s Fast Looks in Scottsville’s Race 4.

We wish him all the very best for the future.