The ceremony, held on Tuesday, 23 January 2018 at the iconic Claridge’s Hotel in London, saw Arrogate awarded the Longines World’s Best Racehorse title for the second year in a row, with a rating of 134. The Australian mare Winx took second place with 132, followed by Cracksman (GB) and Gun Runner (USA), who were tied third at 130.

American Thoroughbred and 2016 Longines World’s Best Racehorse Arrogate set himself apart again in 2017 with a rating of 134 and was given the prestigious Longines World’s Best Racehorse Award for the second consecutive year. Incidentally, the watch brand Longines proudly timed his victory in the Dubai World Cup. Arrogate’s owner Juddmonte Farms Inc., represented by Lord Teddy Grimthorpe, and trainer Bob Baffert were presented with a unique Longines watch and an iconic Longines Equus Crystal Vase.

Australian mare Winx, who occupied third place in 2016, was honoured as the second highest-rated horse with a rating of 132 in 2017. Currently the richest horse in Australian history and the highest rated turf horse in the world, she won all nine of her starts in 2017. Winx’s regular jockey, Hugh Bowman, claimed the 2017 Longines World’s Best Jockey title, a recognition he received last December during the Longines Hong Kong International Races Gala Dinner.

Third place was taken by both Cracksman (GB) and Gun Runner (USA) with a rating of 130. Cracksman earned his rating in the QIPCO Champion Stakes, timed by Longines. His primary jockey, Frankie Dettori, received the Longines World’s Best Jockey Award in 2015. 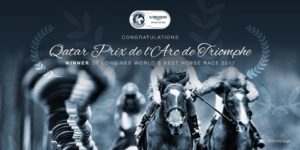 Additionally, the Qatar Prix de l’Arc de Triomphe claimed the title of 2017 Longines World’s Best Horse Race. France Galop President Edouard de Rothschild was in London to accept the award and was presented with an elegant Longines timepiece and a replica trophy representing a proud horse head. The first four finishers of the Qatar Prix de l’Arc de Triomphe in 2017 were Enable, Cloth of Stars, Ulysses and Order of St George. The Arc was also the inaugural winner of the Longines World’s Best Horse Race Award in 2015.

Longines has been based at Saint-Imier in Switzerland since 1832. Its watchmaking expertise reflects a strong devotion to tradition, elegance and performance. Longines has generations of experience as official timekeeper of world championships and as partner of international sports federation. Known for the elegance of its timepieces, Longines is a member of Swatch Group Ltd, the World’s leading manufacturer of horological products. With the winged hourglass as its emblem, the brand has outlets in over 150 countries.

Major areas of the IFHA’s activities include:

The IFHA is a foundation member with Fédération Equestre Internationale (FEI) of the International Horse Sports Confederation and is affiliated to the World Organisation for Animal Health (OIE).