Loyal supporters of Cape racing, Alec and the Honourable Gillian Foster have enjoyed one of their greatest summers in over thirty years of racing in this country. They could well have an Investec Cape Derby back-up on their hands after Doublemint’s impressive R250 000 Gr3 Politician Stakes score at Kenilworth on Saturday. The Fosters own the current top-rated Derby entry and Cape Guineas winner Tap O’Noth and thus hold a potentially strong hand for the classic on Sun Met day.

And they are in very good company! The Grant van Niekerk and Justin Snaith partnership gained further impetus with a hat-trick of victories between them on Saturday – and five overall over the two days of the L’Ormarins Queen’s Plate Festival Of Racing – with a big win for the Foster’s flashy chestnut Doublemint.

A two-time winner, with a victory over the boom 3yo Talk Of The Town to his credit, Doublemint was not expected to be quite ready to win a Gr3 at his first try at 1800m. 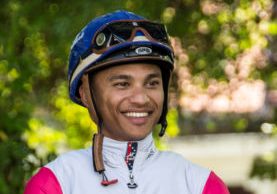 But the race panned out perfectly, with the son of Twice Over relaxed in third and tracking The Sun Also Rises and Run Red.

Van Niekerk gave Doublemint the sign at the 350m marker and he strode on past the pacesetter like a smart horse to hold The Sun Also Rises – who found a second breath late – to a 1,50 length win in a time of 111,73 secs.

Trainer Justin Snaith labelled Doublemint an ‘arrogant type of horse who doesn’t enjoy getting beaten.’ He admitted modestly that there was no real plan and the race had just come up. He may now be thinking about further options for the handsome chestnut.

Doublemint, who has won 3 races with 3 places from 7 starts for stakes of R289 000, was bred by Alec Foster from Klawervlei sire, Twice Over (Observatory) and is out of the one-time winner Nepeta (Tale Of The Cat). An outstanding racehorse and European champion, Twice Over produced Gr1 winner Sand And Sea from his first crop and his progeny have been in demand in the sales ring. His yearlings made up to R2,1 million  at the 2017 Cape Premier Yearling Sale, and his 12 lots at the sale this month will attract plenty of interest.

On the racetrack, Twice Over won 12 races, with his victories including four Gr1 contests. A dual winner of the G1 Champion Stakes, he banked more than £2 million.

At Last – A Lawyer Everybody Loves!