L’Ormarins Queen’s Plate weekend is always one of the highlights of the year, so 5 and 6 January 2018 had been blocked off in my diary months in advance.

Well, kind of. With Christmas and New Year, inconvenient public holidays messing things around and all the stresses and dramas that the festive season brings, December, January and February have really been reduced to a chaotic blur as one stops knowing what day of the week it is or which way is up. So the L’Ormarins Queen’s Plate is a tiny, shimmering oasis in the middle of it, serving as the last brief hiatus at the top of the rollercoaster before rushing headlong into the rest of the year. Perhaps it’s this sense of a sort of second Christmas that makes it such a favourite.

I was really looking forward to seeing what the second Friday Garden Party would be like, particularly as most of the garden is no longer and of course, this year came with the added expectation of history in the making with Legal Eagle tilting for his third silver platter in a row. And that’s just the main race. With plenty of my favourites all across the card, visitors from all across the country and the world, just the prospect of being on course was already enough to get me to Kenilworth early. 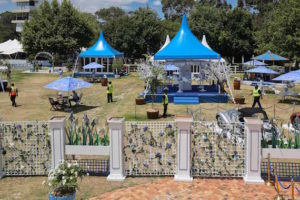 As always, smiling car park attendants waved me through onto the infield parking – something that always gives a frisson of excitement for some reason – the sun was out and as always the course was beautifully dressed. The South Easter from the last two years stayed away, so the day was warm, but there were plenty of picnic umbrellas, marquees and hospitality tents to dive into to escape the sun. It did mean people were divided into pockets, rather than mingling and picnicking as they did last time round, but as the LQP organisers reprise and refresh the layout year on year, it’s always interesting to try something different.

There were plenty of folks who had gone to town for the Best Dressed competition and equally many sporting beautiful hats and fascinators. It was even more interesting to find that most of the prettiest ones were created by Yanti Geroudis and anyone looking for gorgeous, custom made millinery should definitely give her a call.

Friday’s racing was good with Master Of My Fate getting out of the starting blocks in race 1 with his first runner for the Joey Ramsden yard (who saddled the first two past the post) and the first few races dished up a series of tight finishes. Unbelievable Chad finished in the money in race 5 and owner Chad le Clos and his father Bert were on course to support their horse and were wonderfully gracious in chatting to fans and posing for photos.

Possibly my favourite moment of the day was stepping out of the BSA stand in the middle of one of the early races. There was a big screen just outside, so I stopped to watch the finish, rather absent-mindedly paying little regard to the adjacent picnic table of revellers. I was mortified to be politely shoed out of the way by one of the gentlemen at the table and then enchanted by the fact that they were actually seriously engrossed in the outcome of the race. How marvellous!

And while there were a fair few ‘day trippers’, it was lovely to bump into some favourites from the breeding and ownership ranks and we spent a lively afternoon squabbling over the betting, catching up on news and generally setting the world to rights.

Candice Robinson claimed the first feature scalps of the festival with Leaves Of Grass in the Listed Ardmore Jamaica Handicap and Magical Wonderland confirmed her earlier credentials as being something really special in the Gr2 Cartier Sceptre Stakes. Candice Robinson and Anthony Andrews book-ended the card with Ballad Of The Sea in the last and just like that the first day had flown by.

Day two required a somewhat earlier start and proceedings kicked off promptly with the Work Riders’ Maiden Plate at 13:05. Candice Robinson claimed the fillies juvenile plate with Clouds Unfold and seems to be showing a definite nick with the What A Winter progeny. Brett Crawford and Corne Orffer got the better of Mister Colin in the third and then it was straight into the serious stuff with Brett Crawford and Greg Cheyne lifting the Gr3 Heineken Chairman’s Cup with Our Emperor in a tight finish. The Peninsula Handicap boasted a really stiff line-up and while there have been a few grumbles about the result, Anthony Andrews produced a polished performance to bring home the very smart Eyes Wide Open for the Woodhill Racing team. Glen Kotzen seems to be making this race his own after winning it with Light The Lights in 2016.

There were a few hard luck stories as well and I was particularly sad for the magnificent Black Arthur who suffered an epistaxis. I hope he is on the mend soon.

The Paddock Stakes lined up some of the most exciting female talent in our ranks and as always, it’s horrible that only one can come home the winner, but Grant van Niekerk made it look easy on Oh Susanna for Snaith Racing and Drakenstein Stud and the filly will be supplemented into the Met on the strength of that performance. 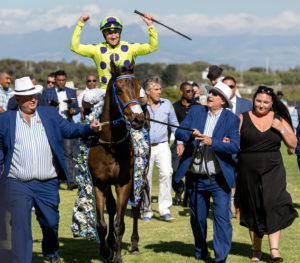 If the Paddock Stakes was tough, it was even worse choosing who to shout for in the main race, but the easy, fluid way Legal Eagle cantered down signalled that the Champ was in top form. Nevertheless, Corne Orffer had us all on the edge of our seats with his front-running tactics on Captain America, and then suddenly there seemed to be horses coming from every direction. Copper Force bobbed and weaved around horses, Sail South and Marinaresco sprouted wings and while Legal Eagle was certainly pressed to the line, Anton Marcus had timed it to devastating perfection. After all the ups, downs and uncertainties of the last few weeks, it was the most fitting result. We are so lucky to have this fantastic horse on our tracks and it was a privilege to be on course to see him make history. Huge congratulations to Braam van Huyssteen, Billy Henderson and Hedley McGrath – may the winning high last a good long time. Also huge plaudits to the team at home who produce this horse at his fabulous best year on year. 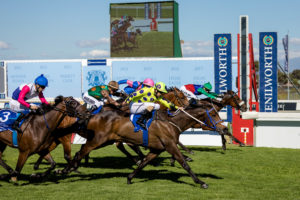 I just want to make a special mention of Lyle Hewitson who kept a calm head under pressure to produce that spectacular 2nd on Copper Force. Having hitched myself to his star since we met on the set of Legends Of The Turf, I am hugely impressed by how fast he is developing into a top notch rider. Another special mention must go to the Azzie yard – Hat Puntano looked absolutely magnificent. The last minute change in travel plans would have taken its toll and I’m sure we will see him back to best in the near future.

Grant van Niekerk and Justin Snaith were a power pairing on the day, bringing home the Twice Over colt, Doublemint in the Gr3 BMW Politician Stakes. The equally reliable Brett Crawford and Corne Orffer got Phelan Lucky home by a comfortable 1.25 lengths in the penultimate race of the day and Team Van Niekerk and Snaith signed off the afternoon’s racing with Platinum Class in the last and racing finished at a very civilised 18:35.

It’s not often one wants to hang around after races, but the Queen’s Plate is just one of those days. We toasted a successful day from the Garett Bar as the sun set over Table Mountain, did a quick round of hellos and goodbyes upstairs and there was just time for a few rounds of chopsticks duets with Heather Morkel on the foyer piano before we bid the Queen’s Plate goodbye for another year.

As always there were wonderful touches all over the course and it’s always fun to see what is new and what interesting features have been added, but in that ‘Christmas spirit’ vibe, the best part of the meeting is that it feels inclusive and the team go out of their way to ensure we have presenters, race callers and personalities from across the racing spectrum. The racing community responds in kind, meaning there are favourites and familiar faces – horses and humans – from all four corners of the country, making it feel something of a family event. 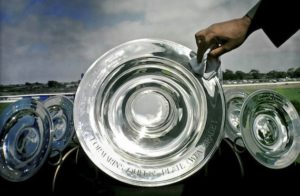 The one everyone wants to win (photo:  LQP)

One of the testaments to this is that the sponsors have refused to be pulled into the high stakes hysteria seen at some of our other flagship events and it is an absolute credit that in the true spirit of the sport, this wonderful race attracts our best for the honour of winning the race, rather than chasing a big cheque and in that it stands as a testament to the heritage and the sport itself.

This year more than any other, there seemed to be a particularly happy and expectant mood. Perhaps it was because everyone’s horses were in a good space, perhaps it was the weather – who knows, but everyone gathered in the spirit of the day, did their flat-out best and still managed to have fun doing it.

One particularly lovely gesture was the competition run in the L’Ormarins room with services to some of the Drakenstein stallions as prizes, including a service to Duke Of Marmalade for the most successful breeder on the day and a darts competition for a Futura service as a bit of fun. Connemara Stud’s Paul Garlicki correctly predicted the winner of the main race and was selected by lucky dip as the recipient of a service to What A Winter.

Paul was rightly thrilled, particularly with What A Winter’s great results over the two days. “We are very grateful to L’Ormarins and Drakenstein Stud Farm. We were having a wonderful day anyway, but winning the service was just the cherry on the top. They really go all out to make it an enjoyable day for everyone.”

I think that more or less sums it up for me. From the biggest gestures – such as ensuring that Legal Eagle’s name was added to the honour roll straight after the race – to the smallest, like the lovely hand soaps in the bathrooms, it all adds up to making one feel like a treasured guest, which is the thing the L’Ormarins team do so very well.

With the CPYS and Met looming large on the horizon, the roller-coaster will be gathering speed from here on in, so before we all get run away with, my sincerest thanks to Gaynor Rupert, Katherine Gray and the army of unseen hands behind the scenes who work so hard to make it all happen. L’Ormarins Queen’s Plate day 2018 was, as always, a day to remember.

3 comments on “A Plate Fit For A King”