No action will be taken against any individual following the public outcry around  the debut win of the Oratorio filly Carlita at Fairview on 3 January. Carlita wins by a mile on debut cruise

This was confirmed by NHA Racing Control Executive Arnold Hyde in response to an enquiry from the Sporting Post as to the status of the inquiry launched after Carlita’s debut win.

The filly, who is owned by Ashley Fortune and trainer Alan and Glennifer Greeff, was backed from 10’s into short odds at the off on debut, as if the result was known. She duly won by over 8 lengths in the hands of Teague Gould.

Trainer Alan Greeff’s comments on Tellytrack’s raceday preview earlier that day,  that the debutante ‘would need the run but could manage the back end of quartets’ raised eyebrows, with some punters crying foul in view of the flood of money for the winner.

Jockey Andrew Fortune – not riding due to injury – was on course to lead the winner in with his family. There were suggestions afterwards that he had in fact ridden his wife’s filly in work a few days prior to her debut. 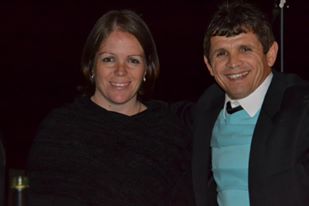 He said after the race that he was pleased with the win, despite the daughter of Oratorio having looked ‘fat’ in the preliminaries.

In the interim Carlita has developed into a leading 2yo prospect.

She suffered her only defeat to date when runner up to the Snitzel colt Traces in the Listed Tattersalls Summer Juvenile Stakes on Sun Met day.

She made it two wins from just three outings when romping home to a two and three quarter length win in a juvenile plate for fillies over 1000m at Fairview on Friday 23 February under Andrew Fortune’s son, Aldo Domeyer.

Bred by the Piemonte Stud, Carlita is out of the Point Given mare Auburn Annio.

She was a bargain R35 000 purchase from the 2017 KZN Yearling Sale and is one of three juvenile winners for Oratorio this season.

Her part-owner, Ashley Fortune, recently wrote her trainer’s licence exam. So the chances of seeing Carlita competing in Johannesburg must be a possibility.