Justin Snaith’s Cape Summer Season dual Gr1 winner Snowdance found one too good for her on an action-packed Friday evening at Greyville when Ashburton-based Fiorella got her head in front in the final stride to win the R500 000 Gr2 Daisy Fillies Guineas. Deceased champion Captain Al produced the top two home in the opening classic of the SA Champions Season  – but in the wrong order for many, with the local lady Fiorella capitalising on the suspect fitness of the thirteen-week rested Cape star.

The big win appeared to come as a bit of surprise for both winning trainer Duncan Howells and jockey Anton Marcus, who sounded as if they had resigned themselves to a place cheque at best.

“I still think Snowdance is the superior filly. I feel she is probably the best 3yo filly in the country at weight-for-age. And she probably just needed it after initially fighting us off late in the race,” said Marcus. 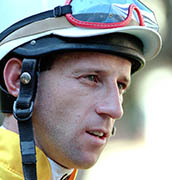 Anton Marcus – what a ride!

Starting at short odds-on, Bernard Fayd’herbe rode a confident race on Snowdance as the long-striding Cheveley Stud bred galloper carted her field along and looked a winner right up to the 200m marker.

Even when Anton Marcus gathered Fiorella late in his customary style, Snowdance dwarfed her and looked to have things under control.

But Bernard Fayd’herbe hit the panic button late as Snowdance changed legs but had to put up the white flag as the gutsy 11-1 shot  Fiorella pulled off a massive win to score by a short head in a time of 96,73secs.

The top two were 1,25 lengths ahead of Elusive Heart, with Roy’s Riviera a fair fourth.

With Snowdance stretching her field from the off, Dennis Drier’s star Lady In Black never settled and blotted her perfect Greyville copybook, when finishing just out of the money. She can only improve on this ahead of the Woolavington 2000.

Owner Dave Maclean was on hand to collect the winner’s trophy and it is good to see him competing actively this season in the black-type league. He also owns, amongst others, the smart 3yo Neptune’s Rain, who featured prominently in last Sunday’s Poinsettia finish and has been labelled a Gr1 filly by Howells.

A R700 000 National Yearling Sale purchase, the Varsfontein-bred Fiorella has now won 4 races with 4 places from 9 starts and stakes of R606 625.

A daughter of late champion sire Captain Al (Al Mufti), she is out of Caesour’s SA Oaks winner Arcola –a half sister to fellow Oaks winners Ash Cloud and Princess Of Light .  She is bred on the same cross as ill-fated Paddock Stakes winner Emerald Cove.

Snowdance will be back – with the Gr1 Gold Challenge to be run at Greyville on 9 June over the same course and distance her likely main goal of the season.

Newsflash: Anton Marcus Is Out