Durbanville has edged up the world’s best racehorse rankings.Well, let’s pretend so anyway. That could be the deduction after Worcester Racecourse, which has never been the lap of luxury, hit an all-time low on Saturday.

Trainers suggested that they would boycott the track after being crammed into a four foot bar or shed, whose beer pumps weren’t working. The TV – a small screen – had been borrowed from the Tote and that didn’t work too well either.

The Racing Post reports that Worcester was on Monday described as the worst track they had attended by owners Nicky Martin and Wayne Clifford as they joined trainers Alan King and Warren Greatrex in criticising the  facilities and calling for change.

Martin was at the course on Saturday as an owner with the Charlie Longsdon-trained Treackle Tart, but insists she will not be returning.

Ten-time champion trainer Paul Nicholls tweeted that some of his long-time owners wished not to return to the track following Saturday’s meeting, while fellow trainer Joe Tuite said he was appalled at what he saw on a first visit to the course in more than 15 years.

Martin, who also trains, said: “The facility they moved owners and trainers to was just far too small.

“It was horrendous. There was very limited seating for about 15 people, it took 20 or so minutes to buy a drink and it was just horrible. I won’t be going again.

“In terms of owners’ and trainers’ facilities and the stable canteen, it would be the worst track I’ve been to. Hopefully something is done to improve it.”

Clifford is approaching 30 years as an owner and chooses not to attend Worcester on account of the poor facilities.

He said: “It’s a tip and I never go there. I run my horses there as it’s a nice, fair track but I would never go along and go in the owners’ and trainers’ facilities – I’d sooner sit outside on the grass. It’s been like it for years and it’s terrible.

“I went to Guernsey the other week – they haven’t got any buildings but the experience and facilities for owners was better there than it is at Worcester.

“Some tracks have done something about it and Bath, Salisbury and Taunton have improved significantly and are fantastic. Worcester stands out in the crowd – it’s the worst track I’ve been to.

“It must definitely put owners off investing in the sport when they are treated like that – if that is what horseracing is about, we might as well give up.”

Read more Short Head snippets – click on the image below 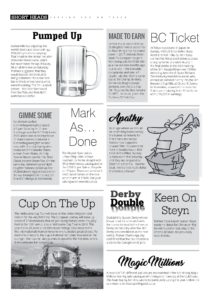 JP & Robbie On Top In Mauritius