The 3yo Twice Over gelding Do It Again produced a sustained finishing effort to write jockey Anton Marcus’ name into the SA racing history books as he became the leading July jockey of all time, grabbing a fifth trophy in the great race  – having won his first July on Dancing Duel a quarter of a century ago.

South African horseracing’s great day hosted the premier 2200m feature  in front of over 40 000 people, and with five runners in the eighteen horse line-up, including the long-time favourite African Night Sky, the Cape-based Snaith Racing Team always looked to hold the edge.

On a memorable and incident-filled afternoon, the dream came true for the brothers Snaith, with their third July winner and a top three finish that spoke volumes of their dominance of the event from entry time in April.

After a disappointingly stuttering jockey introduction in the parade ring (why use a non racing MC?), the runners had to sweat out a fifteen minute delay at the starting gates arising from what appeared to be an unforeseen electrical fault.

The field got away on terms and there was no pace on early – despite our assurances to the contrary from two top jockeys earlier last week!

After White River had led for the first 500m, Jeff Lloyd started making a move to take up the running. But the Australian-based rider, bidding to win his first July at his 26th and final attempt, was overtaken by Grant van Niekerk, who took the favourite African Night Sky up to lead.

The son of Dynasty turned for home ahead of Made To Conquer, as Anton Marcus urged Do It Again to run from six lengths off.

Made To Conquer hit the front and looked to be going well enough into the final stages.

But all the jets were powering on the 9-1 Guineas winner Do It Again and Anton Marcus swept into the lead as he charged away to beat Made To Conquer by 1,25 lengths in a time of 135,20 secs – the slowest time in the last four runnings. Snaith rounded off a rare trifecta with comeback hero Elusive Silva showing that his heart is far bigger than two tendon injuries, as he battled on for third a further 4,25 lengths back, to confirm his recent Betting World 1900 victory.

Dubai-bound Majestic Mambo (6,75 lengths) made up lengths in the straight to bank fourth.This is not his ideal course and we will follow his overseas progress with interest.

African Night Sky’s exertions told in the final 300m and he hung on for fifth (7,25 lengths). Van Niekerk may have a few questions to answer for a strange decision on a horse who has won over a mile.

The rest – including the questionable inclusions – were well beaten.

Sadly SA Triple Crown winner Abashiri appeared to go wrong at the 300m marker and was pulled up by Piere Strydom. He did a near-fore tendon and was assisted from the track, according to an official on duty.

Anton Marcus said that he had enjoyed a trouble-free passage and that he felt that he had the race in the bag at the 200m. He said that when he saw African Night Sky overracing in front, he knew he had a major chance. 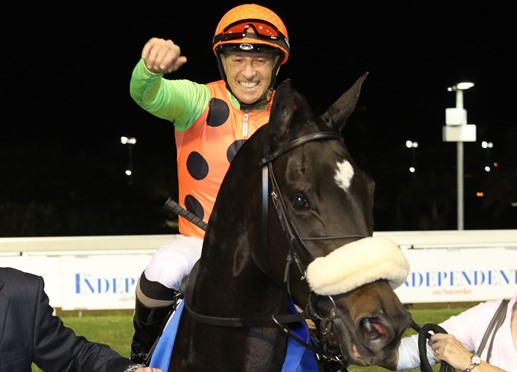 “Ït’s always a special race and kudos to Vodacom,” he said.

Part owner Bernard Kantor, who has raced in the top flight overseas, said that there were no words to describe his first July win.” Änybody who thinks SA racing is in trouble only needs to attend this day,”he added.

Part owner Nic Jonsson also owns a share in the runner-up Made To Conquer. He hails from an old horseracing family and said it was an honour to achieve something that had not been done in 150 years before him.

He was knocked down to John Freeman for R1,1 million at the 2016 National Yearling Sale

Bred by Northfields, Do It Again is a son of Twice Over (Observatory) out of the six-time winning Sweet Virginia (Casey Tibbs).

The tough but slightly built Sweet Virginia is out of the Royal Prerogative Millie Bovana. She was victorious in the 2005 Gr3 Final Fling Stakes, and walloped the boys in the Gr3 Winter Classic and Winter Derby – a feat not matched by her own sex since.

Famous Silks Back In Winner’s Enclosure