Vaal lady trainer Ashley Fortune has made a terrific impact in just five months in her new role and she struck another blow for the fairer sex when Tsitsikamma Dance dug deep under a determined Ryan Munger to win the R500 000 WSB Grand Series Leg 2 at a multi-seasonal Turffontein on Saturday. In her personal tribute to a colleague whom she admired and respected, there was some emotional irony that Ashley’s superb victory came just hours after she had learnt of the passing of a legend in former multiple SA champion trainer, Jean Heming Barnard.

With the sunshine punctuated by clouds and threats of lightning, the much anticipated second leg of the Grand Heritage split went ahead and, like the first leg forty minutes earlier, produced a grandstand finish of some thrilling proportions. 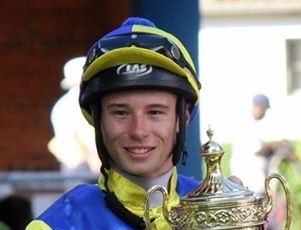 Riding with confidence, Ryan Munger – who risked the weather and sacrificed his Durbanville commitments to stay at home – had Tsitsikamma Dance relaxed in third  as the enthusiastic Pilou and Huyssteen did the hard work out front.

Grabbing a length on the pack, Tsitsikamma Dance looked to be going away with it until Chase Maujean got a tight split on Zouaves.

The slightly built but gallant Woodruff runner displayed guts under his 61kgs to produce a re-run of the first leg.

In a  drive to the line, Tsitsikamma Dance and Zouaves went neck for neck, with the photograph showing that the Munger-Fortune combination had scored a well deserved success.

Full Of Attitude was well placed throughout and finished 1,25 lengths away in third, with the Gokan Terzi-trained Daffiq boosting the quartet dividend in fourth.

The favourite Mardi Gras had to overcome a wide draw and ranged up dangerously late – only to fade into fifth and 2,35 lengths off the winner. It seems that jockey Gavin Lerena’s sentiment that the son of Oratorio is a really smart sprinter may be spot on.

His stablemate, 2016 Grand Heritage winner Irish Pride was the last horse to bank a cheque when he earned R5000 for his efforts in tenth position – 7,75 lengths off the winner. Bred by Phumelela Chairman Bernard Kantor, Tsitsikamma Dance is a son of Captain Al (Al Mufti) out of the one-time winner, Dans With Sally (Dansilli)

The winner was bought for R175 000 by Jumat Cola off the Cape Premier Yearling Sale.

Ashley Fortune told the Sporting Post that Mr Cola selects and buys all his own horses. “Just shows you – some guys have an eye for value and quality and to get a Captain Al for that price i something else,” said the thrilled horsewoman, who is growing in stature with every passing month.

Trained originally at Philippi by Brett Crawford, for whom he won two races, Tsitsikamma Dance was transferred to the Fortune’s Vaal yard last term and is unbeaten in two starts for them.

‘A Great Time Time To Buy And Race Horses’