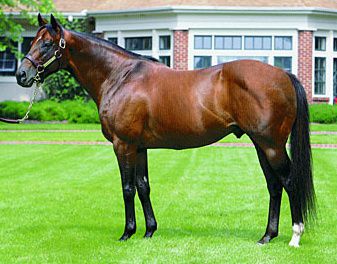 Locally, Kingmambo is damsire of dual Track And Ball Oaks winner Witchcraft, among others.

He is also the sire of Love Me True, a regally bred matriarch whose descendants hit the headlines over the past weekend.

Herself a stakes placed winner (she was third in the Gr3 Killavullan Stakes), Love Me True was firmly established as a high class mare prior to this weekend, with her progeny including five time Gr1 winner Cartier Champion Duke Of Marmalade as well as Gr1 Investec Derby hero and Coolmore sire Ruler Of The World.

However, Love Me True took her status to a new level this weekend, with a pair of sons responsible for group winners over the weekend, and another son landing the Godolphin Flying Start Zetland Stakes at Newmarket on Saturday.

Her classic winning son Ruler Of The World hit the headlines when he came up with a first Gr1 winner in the form of Iridessa. Ruler Of The World seen winning the Investec Derby in 2013

The latter gave her sire a Gr1 winner from his first crop when she stormed home to win the Gr1 bet365 Fillies’ Mile (one of Britain’s top contests for 2yo fillies) at Newmarket on Friday.

Iridessa is interestingly bred with her dam,  Senta’s Dream, being sired by Danehill – who is the sire of Ruler Of The World’s champion half-brother Duke Of Marmalade.

This Gr1 success has sent Ruler Of The World, who himself was unraced at two, into the second spot on Britain’s Leading Second Crop Sires, with the son of Galileo second only to the sensational No Nay Never (Scat Daddy).

Ruler Of The World was not the only son of Love Me True responsible for a group winner this weekend, with his half-brother Duke Of Marmalade sire of Saturday’s Gr3 Premio Verziere Memorial Aldo Cirla winner Flower Party. The latter is inbred to Lassie Dear, with her dam being sired by a son of A P Indy – a grandson of Lassie Dear.

Duke Of Marmalade, who has two members of his first South Africa nominated for the upcoming Western Cape Fillies Championship, has 37 black type winners to his name, with his notable performers including the G1r winners Big Orange, Simple Verse, Nutan, Sound Of Freedom, and Star Of Seville. Duke Of Marmalade – during his racing days

Duke Of Marmalade is showing promise as a broodmare sire and is damsire of 2018 group winners Antonia De Vega and Chilean.

Love Me True’s weekend success, however, was not limited to group winners sired by her Gr1 winning sons.

She is also dam of Norway (a Galileo own brother to Ruler Of The World) who stamped himself a colt to follow when landing the ten furlong Zetland Stakes in pleasing style.  A colt who holds entries in both 27th October’s Gr1 Vertem Futurity Trophy Stakes and the 2019 Investec Derby, Norway is certainly bred for the classics and, while a way below the top performers this season, may well have further improvement to come in 2019.

Love Me True’s stud success hardly comes as much of a surprise. Not only has she been mated to some of the world’s best stallions (Duke Of Marmalade is by Danehill, while her other notable performers were sired by Galileo and Montjeu), Love Me True is from a female line as potent as any other in recent memory.

She is out of Lassie’s Lady, a stakes placed Alydar half-sister to Champion SA sire Al Mufti, US Broodmare Of The Year Weekend Surprise, and dual Gr1 winner Wolfhound – the latter sire of Bungle Inthejungle – one of the Leading First Crop Sires in GB/Ireland this year. Love Me True is also a three-parts sister to five time Gr1 winner and champion Lemon Drop Kid, a top class sire, and, if anything a better broodmare sire than his own sire Kingmambo.

More from: Breeding, News
More on: Duke Of Marmalade, Kingmambo, Love Me True

Dynasty Son Legislate Back At Stud